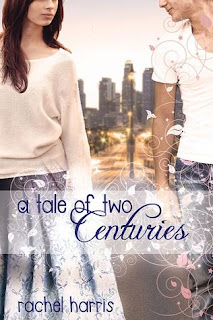 Blurb from Goodreads: Alessandra D’Angeli is in need of an adventure. Tired of her sixteenth-century life in Italy and homesick for her time-traveling cousin, Cat, who visited her for a magical week and dazzled her with tales of the future, Alessandra is lost. Until the stars hear her plea.
One mystical spell later, Alessandra appears on Cat’s Beverly Hills doorstep five hundred years in the future. Surrounded by confusing gadgets, scary transportation, and scandalous clothing, Less is hesitant to live the life of a twenty-first century teen…until she meets the infuriating—and infuriatingly handsome—surfer Austin Michaels. Austin challenges everything she believes in…and introduces her to a world filled with possibility.

My Review:
The reason why I picked up the first book in this series was because the blurb of the second book sounded so good. While I really enjoyed the first book, A Tale of Two centuries is so much better. This story is full of sweet moments, romance, funny scenes (especialy in the begining) and a great story.

When I picked up this book I was quickly back in this world. There hardly is any intriduction of the sicteenth century before Alessandra is transported to the future and she meets Cat again. I loved the first scenes when Less just arrived in the present time, she doesn’t know a lot (like hardly anything) about modern things and words, and it wa shilarious listening to her thoughts and reading about how she perceived the present.

I really liked Less in the first book, but I liked her evn more reading things from her perspective. I think she is a great characters and she grows so much in this book. She starts of as a shy person, who doesn’t really fit in this century and while she wants adventure, she isn’t really brave. But her time in the present changes her and I liked seeing her learn and grow. I think she is a great character and while she changes a lot, the changes where believeable and not too fast.

At first I didn’t feel the romance at all, the first scene with Austin I really got irritated with his attitude. He was annoying and I couldn’t see why Less would fall in love with him. I guess Less was more willing to find out the true Austin than I was, but when I learned more about Austin I did like him more. And around halfway through I really started feeling the romance and I kept wishing there was some way to get their happy ending. I think the romance is done better than in the first book, it was so believeable and I liked getting to know the true Austin and seeing him fall in love with Less.

I loved this twist on the usual time travel tale, usually someone goes to the future or the past, but I have never read a book where someone from the past goes to the present time. There still isn’t a lot of world building concerning the whole time traveling thing, but there is some explanation added in this book and I liked learning more. Even though there isn’t a lot of explanation about the time travel, it works.

To conclude: I really enjoyed A Tale of Two Centuries, it is without a doubt better than the first book and I once I picked it up, I couldn’t stop reading. I really liked Less and seeing her grow. I didn’t feel the romance at first, but at the end I totally felt the romance and I think Less and Austin are great together. This book is sweet, cute and with lots of funny scenes.

You can buy A Tale of Two Centuries here:
– Amazon
– B&N
– Kobo
– The Bookdepository

3 responses to “Review: A Tale of Two Centuries (My Super Sweet Sixteenth Century #2) by Rachel Harris”