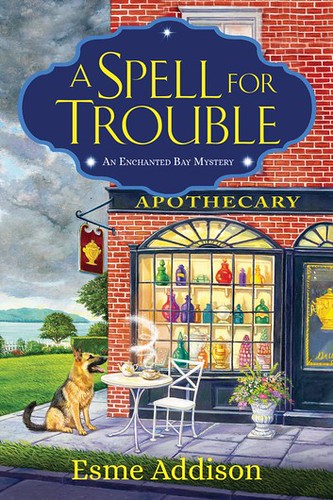 Blurb:
Alexandra Daniels hasn’t set foot in the quiet seaside town of Bellamy Bay, North Carolina in over twenty years. Ever since her mother’s tragic death, her father has mysteriously forbidden her from visiting her aunt and cousins. But on a whim, Alex accepts an invitation to visit her estranged relatives and to help them in their family business: an herbal apothecary known for its remarkably potent teas, salves, and folk remedies.

Bellamy Bay doesn’t look like trouble, but this is a town that harbors dark secrets. Alex discovers that her own family is at the center of salacious town gossip, and that they are rumored to be magical healers descended from mermaids. She brushes this off as nonsense until a local is poisoned and her aunt Lidia is arrested for the crime. Alex is certain Lidia is being framed, and she resolves to find out why.

Alex’s investigation unearths stories that some have gone to desperate lengths to conceal: forbidden affairs, family rivalries, and the truth about Alex’s own ancestry. And when the case turns deadly, Alex learns that not only are these secrets worth hiding, but they may even be worth killing for

I really liked the concept for this one, water witches who are descended from mermaids and run a herbal apothecary? It sounded so fun and that part I did enjoy, but unfortunately something about this book just didn’t fully click for me. I felt like I kept waiting for this one to really hook me and it never did. In fact the further I got the more I lost interest. Which is a shame as I really wanted to like this one.

A Spell for Trouble follows the point of view of Alex, after losing her job she goes to visit her estranged family in Bellamy Bay for a visit. While there she gets pulled into a murder mystery where her aunt is the prime suspect. Determined to keep her aunt out of jail Alex jumps into investigating, all the while learning that she is a water witch just like the rest of her family and having to get used to her new powers.

It was a bit slow to start, but that also could be because it just felt this book was missing something for me. The mystery started out as interesting, but then went kinda downwards for me. There were only a few suspects and it felt like Alex just kinda switched from person to person who she suspected at any given moment. Then she would think of a new theory and switch gears again. I didn’t like how she jumped to conclusions and even basically accused people of murder without any evidence. There also wasn’t a whole lot of clues and hints and I didn’t really feel for a long time like there was more we uncovered. I wasn’t too surprised by who the murderer was and I am sure plenty of people can guess it right, but at the same time there isn’t that satisfying feeling of looking backwards and really seeing the hints and clues line up. The biggest clue toward this person is unearthed late in the story.

I also struggled with the main character Alex. I just couldn’t fully warm up to her. She seemed nice enough with how she cared about her family and dog, but I just wanted a bit more personality. And the scenes where she does display a lot of personality or emotions are often when she’s being rude or accusing people. I just never really grew to like her. I didn’t really like how she handled the investigating. I also wish we would’ve seen more of the dog as I felt there wasn’t enough of her in it.

There was a bit of a hint of possible romances, but neither really went anywhere yet and I am not a big fan of the way either was set-up. The way the relationships developed in this book didn’t really make me eager for either of one. One of the guys mostly stays professional and annoyed with her as he’s a police officer so we don’t see a lot of what’s between them and how they interact when not on a case. I liked the connection Alex had with Dylan, but after how she treated him I hope he’ll not get together with her. Even while he apologizes and comes clean about some of the things he did, Alex never does so and instead gets angry at him and judges him. While she definitely handled things wrong too.

One thing I did really like about this book was the idea of water witches. Although it seems they have a lot of powers not related to water as well. I liked how they could heal people and control water. Although in some scenes they felt more like typical witches with the big variety of spells they could do. I liked the historical background and how they descended from mermaids. It was such an unique touch and set-up for a cozy and I liked seeing more of the magical aspect. I would’ve liked to see Alex use her magic more during the investigation.

To summarize: this book has a great concept with water witches who run an apothecary, but unfortunately this one didn’t quite work for me. The start was a bit slow and I kept hoping this book would click for me, but it never did. The mystery was interesting enough at first, but there were few suspects and not a whole lot of clues and evidence and it felt like Alex was just putting her focus at potential suspects based on her latest theory. I didn’t quite like Alex and how she treated some people, going so far as to accuse people of murder without evidence. She could be a bit judgemental and jumped to conclusions. The murderer didn’t come as a big surprise, but due to the nature of the murder there also aren’t any good hints to this person either. There are two potential love interest as well, I liked Alex’ connection with Dylan, but after how she treated him at the end of the book I hope he finds someone else. The other guy is a cop and mostly gets annoyed with her interference in the investigation. The water witch theme was fun and unique and I liked that.

4 responses to “Review: A Spell for Trouble by Esme Addison”