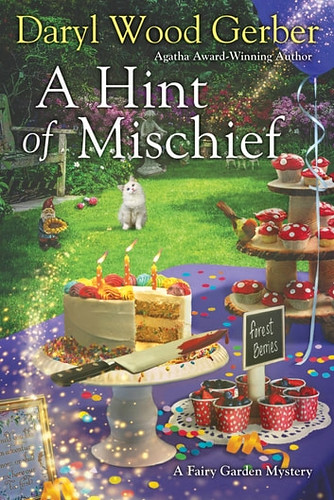 Blurb:
The proprietor of a fairy garden and tea shop in Carmel-by-the-Sea, Courtney Kelly has an occasional side gig as a sleuth—with a sprinkling of magical assistance. . . .

Courtney has thrown a few fairy garden parties—for kids. But if a local socialite is willing to dip into her trust fund for an old sorority sister’s fortieth birthday bash, Courtney will be there with bells on. To make the job even more appealing, a famous actress, Farrah Lawson, is flying in for the occasion, and there’s nothing like a celebrity cameo to raise a business’s profile.

Now Courtney has less than two weeks to paint a mural, hang up tinkling windchimes, plan party games, and conjure up all the details. While she works her magic, the hostess and her girlfriends head off for an indulgent spa day—which leads to a fateful facial for Farrah, followed by her mysterious death. Could the kindhearted eyebrow waxer who Farrah berated in public really be the killer, as the police suspect? Courtney thinks otherwise, and with the help of her imaginative sleuth fairy, sets out to dig up the truth behind this puzzling murder . . .

This is the third book in the Fairy Garden Mystery series, as I read the first two books and enjoyed them I requested this one as well. Like most cozies this one has a mix of the more daily life/ work plot lines as well as a mystery. In the case of this book I really enjoyed the daily life and work plot lines, but the mystery one less so unfortunately.

I love the original theme of this series. It’s so fun to read about Courtney’s business surrounding fairy gardens. Then there are the actual fairies as well. It makes for a fun and unique theme. I enjoy reading about the store and Courtney’s love for fairy gardens. In this book she has to organize a fairy themed party that I enjoyed reading about. Although with all the build up for the party, I thought the actual party didn’t have as much impact as I had expected. There is more we see of Fiona as well as some other fairies. There’s a small side plot line surrounding fairy doors that someone is creating and Courtney tries to spot them all and figure out who’s creating them.

Then on the mystery side there is one of the people who got invited for the party who gets murdered. Courtney being involved in the party planning and knowing all the suspects gets involved. Someone she knows is a suspect and Courtney wants to help her. There’s also a mystery with a thief and a missing manuscript. For some reason the mystery didn’t grip me. I checked and it seems I had the same problem with the second book apparently. I just wasn’t as invested in who had done it.

I felt the book and especially the mystery was a bit slow at times, there wasn’t as much progress especially around the middle part of the book. Then all the red herrings and suspects and motives all get resolved in the last part of the book. When I took some time to think through the suspects I was able to guess the murderer right and strangely enough the logic I used for my reasoning wasn’t one the main character used. I thought the clue the main character used to figure out who had done it wasn’t as clear as a clue. I was a bit bothered by how Courtney basically accused everyone of murder until she finally confronted the right person. It just felt kinda rude how she accuses everyone. I also thought it felt a bit too easy how half of the time the fairies where the reason a suspect talked.

I liked reading about Courtney herself and her interactions with her friends and her Fairy Fiona. The romance with Brady also continues a bit. There is a small bit with her ex being back in town, but I wasn’t quite sure what the point of that was. There was little drama luckily, but even so I felt it didn’t really add to the book.

To summarize: This series has a fun and unique theme about fairy gardens and fairies. I enjoy reading about it and Courtney’s daily life and work. Unfortunately the mystery didn’t really grip me. It felt slow in places and I wasn’t as invested. I managed to guess the murderer right. It felt a bit off to me how the main character figured out the murderer. I thought it was kinda rude how she accused almost every suspect at the end of the book before resolving why they weren’t the murderer. I also felt that there were some plot lines with the thief, the missing manuscript and the ex back in town that didn’t add as much to the story. So this was a bit of a mixed one for me, the daily life, work and fairies plots are fun to me, but the mystery didn’t fully grip me.

2 responses to “Review: A Hint of Mischief by Daryl Wood Gerber”