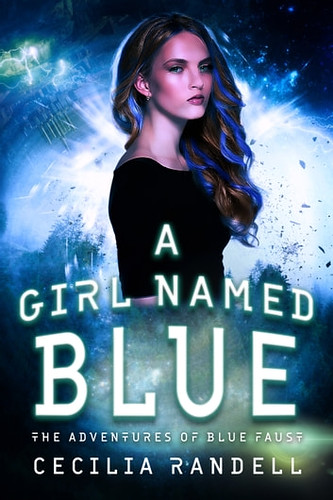 A Girl Named Blue: The Adventure Begins (The Adventures Of Blue Faust #1)
by Cecilia Randell

Blurb:
Seventeen-year-old Blue Faust is no stranger to starting over. Her family tends to uproot her quite often. This time, Blue vows to make the move count, vying to make friends and change her life as she knows it

But when an earthquake hits, Blue’s life is shaken up more than she could ever imagine.

Accidentally traveling through time and space, ordinary Blue and her new friends find themselves in an extraordinary world full of adventure, surprises, and danger they never realized existed. Suddenly, Blue doesn’t know who she can trust. After all, earthlings are being killed by an enemy with an unknown agenda. And little by little, as emotions heighten, she realizes some of her friends are not who she thought they were. As her heart gets pulled in different directions, can Blue battle her way home, or is she fated to stay in this new world–whether she wants to or not?

I recently got reminded about this series and remembered I had picked up book 1. On a whim decided to read it. I am glad I picked this one up, it took me a bit of time to get into the story, but the further I got the more I enjoyed it. I really like the premise of this one and the way the world came alive slowly throughout the book. It reads a bit like portal fantasy, but also like science fiction romance.

A Girl Named Blue follows the story of a girl named Blue as the title suggests. Blue is starting her new school year, she has lost her dad a while ago and she has a plan for this year to make it the year of new things to get her out of her comfort zone. I liked Blue’s perspective on things, the way she valued comfort, but also wanted to push herself. I also liked the way she was close to her dad and the way she accepted her mom like she was. She remained likeable throughout the book. I liked how she was kind and likeable and also smart and capable. She knew she couldn’t handle all situations and knew when to stay out of the way, but also wasn’t afraid to speak her mind.

This story starts relatively normal with Blue starting her new school and making some new friends. There is a bit her spending some time with her new friends until they decide to go hiking one day and while hiking they accidentally get transported to another world. That was the point the story really got interesting for me. I liked learning more of the new world they find themselves in and how this world is connected to other open and closed worlds by the way of portals.

This book was a fun read and had that adventurous vibe as Blue and her friends get more of an adventure than they bargained for. Some of their friends get kidnapped and they want to get them back. They meet new characters there that help them on their journey. And slowly we find out there’s more going on, the kidnappings are related to a bigger problem here. They also have to figure out how to get home. While it has this fun vibe, there are also darker parts with violence and the kidnappings going on.

I liked the slow burn set up for this romance. There are multiple guys that all are interested in Blue and she slowly forms a bond with some of them, but this book only is the start of their connections. Blue doesn’t get into a romantic relationship yet in this book, but the foundations are definitely there. I am curious to see how the romances will develop. I liked seeing how Blue interacted with the other characters and I liked her connection with some of the guys. Others I feel I don’t know enough of yet.

There are a lot of characters in this book and at times I had some trouble remembering who was who. There are a lot of characters we meet in quick succession and some that we get to know mostly in name only. And it could get a bit confusing at times, but this went better as the book progressed. I also felt the writing style felt a bit off at times at first, but this was also something that improved or maybe I got used to it as the book progressed.

This book is told from multiple points of view which I thought worked well here, but there are a few places where I felt that it was a bit much. Sometimes the point of view switches very fast through multiple different points of views and with the big amount of characters and not everyone knowing the same thing it could get a bit confusing at times. And other times the switches went very smoothly. For the most part I did like how the different points of view added something, although it did ruin some of the mystery at times.

I really liked the world building, it’s something that’s slowly becomes more apparent as the story progresses. There are different groups of people and organizations in these world and ways the different world are related, organizations that govern them and factions that span multiple world. They all have their own goals and customs and cultures. I liked seeing more of the Clans people and then later there are mercenaries as well and the ministry and the Order. The world feels very thought out even though we only get to see a small section of it here. It makes me eager to read more and see more of the world.

To summarize: I had fun reading this book it’s an enjoyable story about a girl named Blue who together with some of her new friends accidentally travels through a portal and lands in a different world. Some of their friends get kidnapped and they have to find them and find a way home. They meet new people along the way who help or hinder them. This was an engaging story and I enjoyed reading it. Blue was a kind and likable character who also wasn’t afraid to speak her mind. I liked seeing her interact with the other characters and see the foundations for the romances form. There are a lot of side characters in this book and at times it could be a bit much. It could get difficult to remember who was who at times and there are a few places where the point of view switches a bit too often too quickly. I liked the world building and learning more about this new world and the people that live there. It reads like a light and fun read most of the time, but there are some darker story threads too. I am already eager to return to this series in book 2!

4 responses to “Review: A Girl Named Blue by Cecilia Randell”