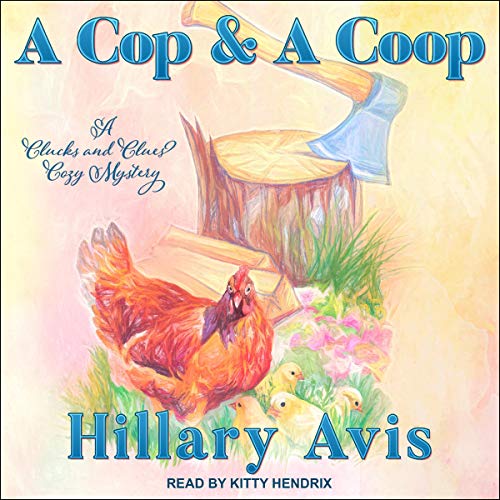 When Leona Davis hatches a plan to return to her beloved hometown of Honeytree, Oregon, she hopes to build the egg farm of her dreams and leave behind the marriage of her nightmares.

But the yolk’s on her when she breaks ground on her chicken palace and unearths a skeleton in her front yard. It’s clearly fowl play. The bones may be decades old, but there’s no statute of limitations on murder.

With a county forensics team roosting on her lawn and a flock of town gossips poking their beaks where they don’t belong, Leona’s well-laid farming plans may be nothing more than a wing and a prayer.

Her spicy high school ex, Sheriff Eli Ramirez, assures Leona he’ll crack the case, but he’s not exactly a hardboiled detective. Her best hope to get back to a life with more hens and less mens? Scramble to uncover her small town’s buried secrets before everything’s totally plucked.

A Cop and a Coop is the first book in the clever, irreverent Clucks and Clues Cozy Mysteries that will keep you chuckling and guessing until the end.

I received a free audio copy of this book from the publisher Tantor Audio. I voluntarily reviewed it.

A Cop and a Coop caught my eye because of the fun chickens focused theme. I don’t think I’ve read a cozy mystery about chickens before. And this definitely was a fun focus for a cozy mystery book. It was the well done twisty mystery that pulled me in further and kept me reading.

Leona Davis is back in her hometown after a failed marriage. She now is trying to rebuild her life and her plan is to start a chicken coop on the old farm she bought. While digging a hole for her coop foundation she stumbles upon the body of a dead person. While it took me some time to get into this book, once the mystery really started I was hooked.

The mystery in this one is a very solid one with plenty of twists. There are so many times when it feels like things are falling on it’s place before another twist brings everything in a new light. It kept me guessing until the end when everything came together. It all makes sense and the way all the clues shed information, but eventually point in another direction then it might seem at first. It was interesting to learn more about the dead guy along the way as well. I liked how Leona talked to people and tried to figure it out and the police actually appreciated her help even though she did a better job at figuring things out then they did. It was nice to see the police appreciate her efforts. It felt realistic how Leona got caught up in it all as the body had been found on her farm after all. It really was an engaging mystery and I liked the way it progressed.

Leona was a nice enough main character. I liked her drive to build her chicken coop and how capable she was, but it did bother me how she never accepted anyone’s help and got too defensive at times. I liked how she investigated the case and talked to the right people to get to the bottom of things and how she thought things through. I did think she could be a tad rude or rough to others at times, but I feel that by the end of the book she learned a bit from that and hopefully she’s more likely to accept help instead of push people away in the next book.

There is a bit of a romance set-up as well with the police officer who she briefly dated when in high school. Most of the book they spend bantering and bickering. It’s clear he still cares about her, but Leona doesn’t believe it and doesn’t like him telling her what to do and can act quite prickly toward him. He on the other hand keeps offering his help and telling her what to do. It could be a tad frustrating at times. Especially when Leona pushed him away, but then when he stayed away she wanted him back. I hope they work things out in the next book as it seems they made some progress at the end. I did like how he appreciated her help in the investigation and how they made for a good team.

There is a bunch of side characters as well that play a role. I liked how we got a good feel for the important side characters and they all had their own personality. There also are some great chicken characters involved, it was funny how she kept ending up with more chickens than expected and all the funny names she gave them. I hope to see more about the coop in the next book.

The narrator did a good job with this book. It took me a few chapters to get used to her voice, but after that it was comfortable listening to her. She didn’t have too much variations in voices for the characters, but everyone still sounded slightly different and it was clear who spoke most of the time. I thought her voice fitted the main character well.

To summarize: this was a fun cozy mystery and a great introduction to this new series. I liked the chicken theme of this book and the way Leona gets involved in the mystery. The mystery is a really solid one with plenty of twists and turns and it kept me guessing. It’s a really engaging mystery and I liked how it all progressed. The pace is well done with plenty of new clues popping up and I liked the reveal of who the murderer was. I liked Leona’s character, but she could be a bit too independent at times and didn’t want to accept any help. There is a bit of a set-up for a romance, but it mostly was banter and bickering in this book, they did make for a good team and I think they might make for a good couple. In this book I didn’t quite care for the romance as he kept wanting to help and tell her what to do, while she kept pushing him away and saying she didn’t need his help. There are some fun side characters and chickens to read about as well. It took me a few chapters to get used to the narrator, but after that it was a comfortable listen. I thought her voice fit Leona. All in all I enjoyed listening to this one and look forward to the next book!

2 responses to “Review: A Cop and a Coop by Hillary Avis”