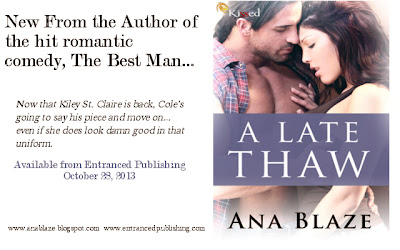 Today is the release day launch party of A Late Thaw by Ana Blaze! 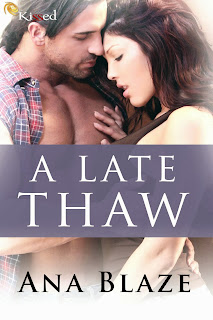 Blurb:
The town’s too small for Kiley St. Claire’s reappearance to be a surprise, still seeing her hits Cole Thomas like a punch to the gut. She ripped his heart apart when she turned to ice and ran away all those years ago. Now that she’s back, Cole’s going to say his piece and move on.
Even if she does look damn good in that uniform.
Kiley St. Claire is back in the small town of Barrett, Vermont, for one reason and one reason only: to earn some cash so she can survive her final semester of grad school. She’s not there for the sexy Christmas tree farmers.
Even the one who once held her heart.

You can buy A Late Thaw here:
– Amazon
– Smashwords 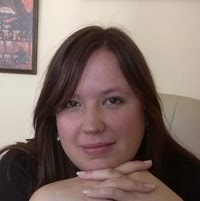 Ana lives just outside Washington DC with her very supportive husband and three rather demanding cats. She loves the ocean, Indian food, Ikea, and cooking. Ana admits to watching too much television and she swears that someday she’s going to learn how to play the guitar resting on the bookshelf in her office.

And to celebrate the release day of A late Thaw there is a giveaway!
a Rafflecopter giveaway

One response to “Release day: A Late Thaw by Ana Blaze”