Today is my stop during the Flirtalicious February Hop. It’s a hop with the goal of sharing flirty or fun stories and posts. As I am not that good at coming up with topics to write about or talking about personal things at all I am sharing two excerpt from two different books by Rachel Harris with you today.

The first excerpt will be for Seven Day Fiancé (Love and Games #2) So let me give you some information about the book first. 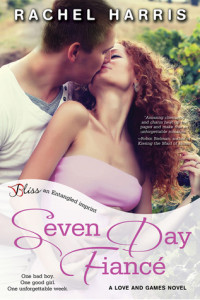 Seven Day Fiancé excerpt:
She bit her lip as he held out his hand and she placed hers in it. Warmth enveloped her skin, stirring up the blood until she was sure her pulse matched the upbeat tempo. “Just don’t step on my feet, city boy.”
At the edge of the dance floor, Angelle found them a spot a little ways from the crowd. Cajun dancing could be as easy or as complicated as you wanted to make it. As a beginner, one who had a heck of a lot of pride, she figured she’d go light on Cane. Especially since people were already eyeing them with curiosity.
“Okay, so we’ll start with the open-handed position,” she told him. “From here, we can do several easy moves you’ve probably seen before. You’ll look like a pro in no time.”
He chuckled as if he doubted it, but she ignored him. With two older brothers, she’d seen enough macho behavior to last her a lifetime. Cane was worried about failing—whether it was because he didn’t want to look stupid in front of the town or her, she didn’t know. But it didn’t matter, either, because what he failed to realize was that Angie was a damn fine teacher.
“Now, old-school dancing is a bit different, but with the Cajun swing and Zydeco, you want rhythm. Your body should be fluid and bop to the beat.” Elbows bent and close to her sides, she took his hands and swung them along with the tempo. He raised an eyebrow, and she rolled her eyes. “You’re a musician, so don’t even tell me you can’t find the beat.”
Cane chuckled and then swung his arms, flawlessly finding the rhythm. They added the feet, pumping with a bounce step, and the amused lightness on his face filled her with so much happiness she thought she’d burst. For a time, Cajun dancing had defined her. The dance floor had been the one place she let herself go, where she didn’t care who her family was or what people expected of her. She lost herself in the lively music and the fast-paced steps. And now, she was sharing it with Cane.
This was the icing on the cake of an already perfect day.
Once the basic step was solid, Angelle quickly taught Cane key moves like the Sweetheart, the Hip Turn, and the Turn-Under. And after several minutes of practice, delightful moments filled with missteps, laughter, and a whole lot of tingles, Angie declared him ready for his dance floor debut.
“If it makes you happy, Angel, I’ll do just about anything. I believe I owe you a date from the auction.” Cane looked to the crowd of colorfully dressed couples spinning, shuffling, and sliding along the plywood. “But you have to know I’m gonna be a bull in a china shop out there.”
“No, you won’t.” While it was true they wouldn’t be winning any dance awards tonight, after only a few songs, Cane was really doing well. “And yes, it would make me happy.”
She smiled brightly, feeling a strange surge of confidence. Cane’s gaze glided over her face, a grin pulling at his mouth, and he pressed a soft kiss on the tip of her nose. “Then lead on, tiny dancer.”
Hand in hand, still smiling, they walked out onto the true dance floor. Cane took her hands in his, and then, they began to dance.
As they swirled around the floor, Angie felt like she was in a movie. A movie that actually showed Cajun people right, instead of a bunch of toothless twits like on Waterboy. They weren’t perfect. Cane still stumbled and got confused. One time, he even stepped on her toes. But it was in those mistakes that Angelle lost a bit more of her heart. He was trying, trying for her, and he was there, for her. The sexy, intelligent, witty playboy before her was willing to make an ass out of himself for the sake of the cause…and because it made her happy. That was worth more than a bazillion blue ribbons and championships.

And there is also an excerpt for one of Rachel her books called Crazy in Love, the title isn’t even added to Goodreads, so I can’t give you the link or any information. But you can read the excerpt:

Crazy in Love unedited excerpt:
“Okay, roadie-man, we’re talking serious points here.” Damp tendrils stuck to Sherry’s flushed cheeks as she glanced back at the aerialist in flight. “I can’t believe your boss hooked us up like this. Either Blue respects the crap out of you, or he’s hella generous. Either way, this date freaking rocks!”
Tyler smiled, ignoring the stab of guilt that coincided with her praise. He’d tell her the truth eventually—he would. But was it a crime that he enjoyed this freedom so much? Yeah, so, he flubbed a few facts here and there. Claimed his big shot boss had hooked them up. Got the Eiffel Tower to open for lunch, and scored private lessons with Cirque du Soleil. But he hadn’t lied about anything important. Other than his career and hinting at his pay grade, he’d been completely himself, straight up.
Only more so.
Sherry’s energy was infectious. Her laughter and uncontained enthusiasm for life contagious. Music meant everything to Tyler, and nothing beat the rush of performing in front of a packed house—but spending the last eighteen hours with this woman, remembering how life used to be before the stress and pressure of expectation weighed him down, was a rush of its own.
“I take it you enjoyed your aerial stunt?”
Sherry’s face lit up in a smile, and he couldn’t help feeling smug. He put that there. Sure, as far as first dates go, this was extreme. They could’ve easily laid low, gone somewhere simple, but he’d wanted to spoil her. Growing up, money equaled tension. Struggle. Deprivation. Finally, he had a bank account that allowed him to be a little frivolous—and he enjoyed taking advantage of that.
Plus, the private dining room and secluded auditorium kept Tyler from being outed by his fans.
A look of near awe crossed Sherry’s face. “You know, I’ve always loved dance and gymnastics, but that…Tyler, holy crap!” She laughed again, and the musical sound was like oxygen to starving lungs. “We flew!”
She reached out and fisted his long-sleeved shirt in her hands, beaming up at him with complete gratitude. Not with undeserved adoration, or manufactured, starry-eyed lust, but with sincere pleasure, and pure feminine appreciation.
That expression was addictive.
It made him feel like he could do anything. Like he was invincible. Worthy. And at the same time, it nearly brought him to his knees. All the groupies in the world couldn’t replicate the satisfaction coursing through him at that moment, and suddenly, nothing mattered more, there was nothing he wanted more, than to kiss her.
To feel the lips that had held him captive since he caught her nibbling them in the green room.
To taste the mouth he’d denied himself last night. 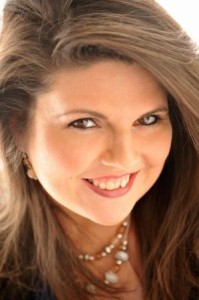 Rachel Harris grew up in New Orleans, watching soap operas with her grandmother and staying up late sneak reading her mom’s favorite romance novels. Now a Cajun cowgirl living in Houston, she still stays up too late reading her favorite romances, only now, she can do so openly. She firmly believes life’s problems can be solved with a hot, powdered-sugar-coated beignet or a thick slice of king cake, and that screaming at strangers for cheap, plastic beads is acceptable behavior in certain situations.
She homeschools her two beautiful girls and loves watching reality television with her amazing husband. She writes young adult, new adult, and adult Fun, Flirty Escapes, and LOVES talking with readers!