Today is the cover reveal of Infinte Potential (Phasm #1) by Barbara Garren. let’s take a look at the cover first: 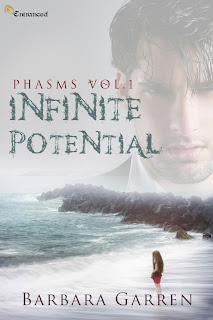 Not sure what to think of this cover. I like the beach setting and the grey and blue colours. But for some reason I think the hazy head hovering in the air is a bit weird, although it get’s used on lost of cover. I like the overal feeling of the cover.

Blurb:
Kelsi always Knows when bad things are coming, but even she never thought she’d lose her husband at only twenty-three. Since he died, she’s been living her worst nightmare.

Her nights are filled with dreams of a Dark Haired Man, but her days are full of guilt, because the Man fills her with longing and confusion, promising to give her all she needs, all she wants, all she feared she’d never have again.
If only the dreams would stay in her head where they belong.
Kelsi starts seeing the Dark Haired Man in her waking life, shadowing her wherever she goes.  And when her mysterious new neighbor, Aiden Hardt, knows about the Man in her dreams, Kelsi worries she can’t trust her own mind.
He’s not what he seems.
But even Aiden’s cryptic words don’t frighten her as much as the way she feels around him. Kelsi must sort through her emotions and figure out what’s real before she can ever hope to have a normal life again. 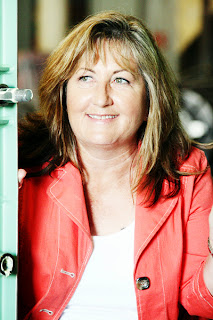 Barbara was born and raised in Southern California, but left to explore the world courtesy of the U.S. Navy. After traveling the world, she forced herself to live a humble life in in San Francisco, New York and Norfolk, Virginia. She now calls San Diego home and you won’t pry her out with a crowbar.
She would be the first  to tell you her husband, Henry, is the inspiration for all the romance, and the real Charlie – who is as cute as he sounds in her books – is a terrorist. When not working for the U.S. Navy, she can be found running, reading or writing. She firmly believes a well rounded diet consists of coffee, scotch, chocolate, popcorn and Luna Bars. In that order.
She’s a graduate of CUNY and Penn State – and manages to write a decent line here and there despite those burdens.