I am part of the cover reveal for Hearts In Exile (Tallenmere #3) by Mysti Parker. I got an ARC for review and wil post my review soon! So now, here is the cover: 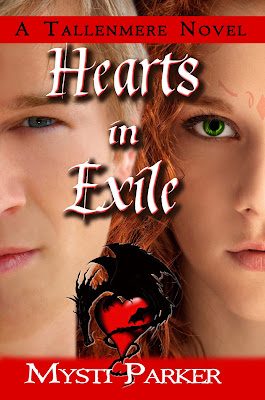 I really like the cover. I like the fact it shows both main characters and while Sir Robert looks a bit different than I imagined I really like how Loralee looks. I also love her green eye, it really attracts attention. And she actually has the tenet symbols on her head! I actually wondered how those would look andI think they look awesome like that, better than I imagined. Bu while Loralee looks fierce and attracts the attention, Sir Robert looks a bit boring in comparison. The dragon symbol also nicely symbolizes the book.

Blurb:
In Tallenmere, fate has a way of catching up with you…

You can add Hearts in Exile to your to-read list on Goodreads.

About the Author:
Mysti Parker (pseudonym) is a full time wife, mother of three, and a writer. Her first novel, A Ranger’s Tale was published in January, 2011 by Melange Books, and the second in the fantasy romance series, Serenya’s Song, was published in April 2012. The highly anticipated third book, Hearts in Exile, has already received some great reviews. The Tallenmere series has been likened to Terry Goodkind’s ‘Sword of Truth’ series, but is probably closer to a spicy cross between Tolkien and Mercedes Lackey.
Mysti’s other writings have appeared in the anthologies Hearts of Tomorrow, Christmas Lites, and Christmas Lites II. Her flash fiction has appeared on the online magazine EveryDayFiction. She has also served as a class mentor in Writers Village University’s six week free course, F2K.
Mysti reviews books for SQ Magazine, an online specfic publication, and is the proud owner of Unwritten, a blog voted #3 for eCollegeFinder’s Top Writing Blogs award. She resides in Buckner, KY with her husband and three children.