I am participating in a cover reveal for J Taylor publishing. So let me first show you the cover: 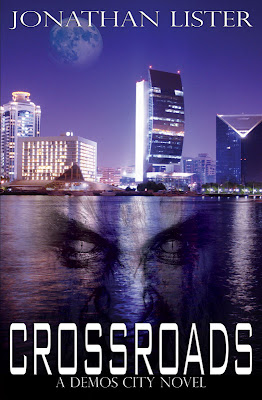 I have to say I am not a fan of the cover. The city looks a bit too normal and then that scary face in the water more likely scares me away than entice me to read this. I do like the colours, but really that face is just too creepy. I also think the moon in the sky is a nice addition. So I almost already convinced myself that I wouldn’t be adding this to my to-read list, but then I saw the blurb and I have to say the blurb is a whole lot better than the cover in my opinion.

Blurb:  Werewolf. Bar bouncer. Dad. Standard traits for any self-respecting, reformed criminal, living under the radar in Demos City. For Leon Gray, normal is what he wants—for himself and his not-yet-changed teenage daughter.

As a budding wolf, she’s piqued the interest of a local pack Alpha—one Leon knows will steal Shauna right out from under him the first chance he gets.

No matter what issues I might have with the cover, the blurb sounds really interesting and original. A book from a dad’s point of view, who also is a werewolf? Okay that sounds amazing. And did you read one of those last sentences, werewolves are seen as equals to humans, yeah I definitely want to read this book.

So what do you think? Do you like the cover or not? And what about the blurb? Sounds like something you would read?