Today is the cover reveal for Brush Strokes, Janelle Stalder her first contemporary romance book! Check out the cover: 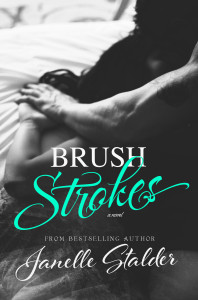 Not sure what to think of this cover. At first look I was a bit confused what actually is going on on this cover. It takes a moment to fully graps it. Then the colour of the word strokes catched my attention. I like the splash of colour, although besides that I think the cover is a bit too dark. The black and white cover with two models on it, is very standard for this genre and this alone already makes it easy to categorize as a contemporary romance. Not a big fan of the cover, it just isn’t all that special, although I do like the sound of the blurb.

You can add Brush Strokes to your to-read list on Goodreads.