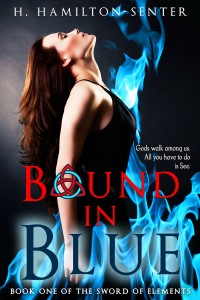 Blurb:
Gods walk among us—all you have to do is See.

High school senior Rhiannon Lynne couldn’t get noticed even if she walked stark naked into the cafeteria and started playing the banjo. While tap dancing. As if that weren’t strange enough, Rhi has synesthesia—she feels in color. It takes being almost drowned by a Celtic river goddess for her to discover she’s been bound by a spell that has hidden her from the world and her own mysterious heritage.

As Rhi starts to see that her colors are connected to magic, she finds herself at the center of a conflict between gods, humans, and the lost world of Avalon. She’ll need to figure things out fast if she wants to be a player in the coming conflict and not a pawn. Each side has a claim on her loyalty, but each one could decide she’s the real threat.

Maybe not being seen wasn’t so bad after all.

My cover review
The first thing I see when I look at this cover is the red and blue screaming for attention. Then there’s the cover model that seemd like she’s being burned alive by blue fire. From the blurb it seems like that blue is some sort of magic that the main character sees blue, but to me it still looks like fire.

The position of the model in the centre of the cover is nice, as the attention goes to there. But the pose of the model feels a bit off to me. She’s just standing there with her head trown back, doing what?

Colours are really important for me on a cover and on this cover the red and blue is too intense and the combination between the two clashes a bit. I think I would prefered the title to be a different colour. There isn’t any background on this cover, which on the one hand is nice as it doesn’t distract from the rest, but it also makes me wonder what scene this cover is trying to display as there is nothing behind or around the person. Or maybe the where just ins’t important.

The cover seems to fit the story from what I’ve read in the blurb and I always like it when the cover and story seems to fit. Add in that the title also fits both and you have a nice focus on a person being bound in blue, which seems to be the focus of the cover, title and story.

To conclude: it’s an okay cover for me. I like it and my attention is pulled to the model and the blue fire surrounding her, which I am assuming is the goal. But the pose of the model seems a bit off and I think the intense blue and red on the cover clashes a bit. It’s a nice cover, but beside the blue fire there’s nothing really special about it. I do like how the title, cover and blurb all seem to focus on the same thing namely a person being bound in blue.