Today is my stop of the By Blood cover reveal book blitz by Tracy E. Banghart. I share some information about the book, the cover, an excerpt and there is an awesome tour wide giveaway (scroll to the bottom of the post for that). 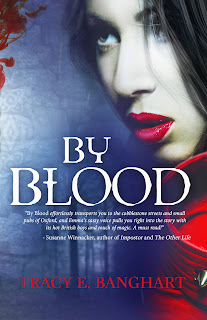 Throw in an estranged mom, annoying new stepdad, and drooling baby half-brother, and it’s a disaster even her favorite cherry red leather jacket can’t fix. Even worse, there’s (hot) live-in research assistant Josh to contend with. The only thing more embarrassing than   drunk-kissing him hours after they meet? Knowing he’ll be witness to her family’s dysfunction all. summer. long.

But when Emma meets a mysterious girl who happens to be a Druid, her vacation suddenly promises to be far more intriguing than she  anticipated. Powerful rituals, new friends, an intoxicating sense of freedom…and Simon, the sexy foreign stranger she was hoping for. It’s all a perfect distraction from dirty diapers and awkward family dinners.

Sounds good, right? You can add it to your to-read list on Goodreads and you can buy it on Amazon.

Excerpt
“This time we’ll each invoke the element of nature we want to draw strength from. Each of us will make an offering—” Simon pointed to the empty bowl. I swallowed. “—and then I’ll close the circle by submitting our offering to the universe.”
I didn’t have a clue what he meant by that, but the last ritual had been pretty easy to follow.
He opened the Grove the same way he’d done before, flashing the sword at East, South, West, and North, and invoking each of the four elements. Again, I felt the tingle of the living Earth beneath my feet. The air was much clearer tonight; a gusty breeze rustled through the watchful trees and set Simon’s candle flickering.
Again, Simon said, “Now that we have called on the elements, we may proceed with the work of the Grove.” And Harrison, Simon, George and Molly purified the circle by air, fire, water and earth.
We’d started tonight’s ceremony later, and long shadows played against our faces. Bryna’s hair flamed in the glow of the setting sun. Tonight felt different; there was an edge to the anticipation. Ash wasn’t smiling. But we were all waiting, tensed to see what would happen next.
Simon set the bowl with the votive on the ground and held up the flask and the sword. “I invoke the spirit of flame to infuse this Grove with strength.” His voice was strong. He took a sip from the flask and then walked to the center of the circle. “By my blood,” he said and nicked his palm with the blade.
I watched a thin trickle of blood drip into the bowl. My face felt hot. When Diana and I were ten, we made ourselves blood sisters, pricking our palms with needles and squishing the tiny drops of blood together. That had been fun, silly even. We’d giggled through the whole thing.
This—this felt real. There was real power in the words Simon said, in the drops of his blood in that bowl. I breathed deeply, watching in fascination as Simon resumed his place and handed Ash the flask and sword. She wiped the tip of the blade against her bare leg and took a drink from the flask.
When she spoke, she did it with authority. “I invoke the spirit of all warm living, breathing things to give this Grove strength. By my blood.” A few more drops of cherry red blood fell into the bowl.
“I invoke the spirit of unyielding stone.” George hissed when the sword slid against his skin.
“I don’t know if I can do this,” Molly declared, looking askance at the sword. But in the end, she invoked the spirit of spring – rebirth, she said – and made a little cut on her palm with a squeal.
It was my turn next. I felt the weight of the sword in my hand, looked down to see my white dress shimmering in the gloom of twilight. What strength did I want from the earth? What power did I wish I had? As I thought, I stepped to the center of the circle and took a gulp from the flask – the flavor was different this time. Spicy, dark. Like red wine, but sharper. It left a coppery taste, like blood, on my tongue.
Suddenly, I remembered the calm I’d felt Saturday, meditating with Ash. The flow of my breath, inhalation, exhalation like waves. “I invoke the spirit of the sea,” I said, and my voice didn’t shake. “By my blood, I ask the ocean to lend us its strength.”
Quickly, so I didn’t have time to think, I swiped the tip of the sword against my skin. The cut burned, but it was shallow and only a few drops of blood leaked out. I stepped back to my place and passed the flask and sword to Harrison.
“I invoke the spirit of air,” he said, gesturing to the incense in the bowl at his feet. I could smell the sandalwood faintly; it mixed oddly with the spicy dark flavor in my mouth.
Bryna went last, and she cut herself the most deeply. I gasped at the small stream of blood as it flowed into the bowl. She invoked the spirit of thunder.
I pressed my palms together and felt the sting of my cut; it had almost stopped bleeding, but I didn’t want to get blood on my dress.
Walking to the center of the circle, Simon held the blood-filled vessel up to the sky. “By earth, air, water and fire,” he said, his voice ringing, “and by our blood, we invoke the strength of flame, of living, breathing things, of stone, spring, and the sea. We invoke the strength of the very air around us and in our lungs, and we invoke the strength of thunder.”
As he said the words, a great gust of wind blew through the glade, whipping my hair off my face. I could almost feel the earth shift beneath me, almost hear the faint rumble of thunder in the distance. My mouth was full of the taste of blood, and my skin shivered under the touch of the wind.
For a moment, we all stared at each other, our eyes wide. 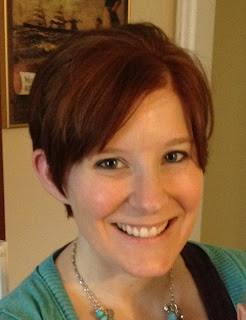 Did that just—what was that?

About the Author:
Tracy E. Banghart is a cheesy movie–loving, fantasy football–playing (go Ravens!), globe-trotting Army wife who began “practicing” her craft at the age of five, when she wrote her first story. She loves visiting the international friends she met while pursuing her MA in Publishing and spends a portion of every summer at her family’s cabin in Canada, where she finds inspiration and lots of time to relax on the dock. She lives with her husband, son, two lazy dogs and one ornery cat. When not writing or spending time with her family, she is on a mission to bake the perfect cupcake.

And now more about that tour wide giveaway I mentioned. Here is what you can win:

Plus (all hardcover):
Beauty Queens, by Libba Bray
Starcrossed, by Josephine Angelini
The Body Finder, by Kimberly Derting
Jane, by April Lindner
By the Time You Read This, I’ll Be Dead, by Julie Anne Peters
Sean Griswold’s Head, by Lindsey Leavitt
Under the Never Sky, by Veronica Rossi
Slide, by Jill Hathaway
Wither, by Lauren DeStefano
Imaginary Girls, by Nova Ren Suma