Today I feature Faery Swap on my blog. This book is released yesterday and I think it sounds really good. There is some information about this book in this post and a small guest post from Susan Kaye Quinn about what she likes about Faery Swap and some questions she answers about this book. 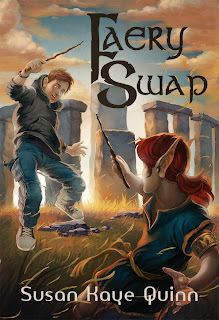 Warrior faery princes can be very stubborn.
Especially when they possess your body.
Fourteen-year-old Finn just wants to keep his little sister out of Child Protective Services—an epic challenge with their parentally-missing-in-action dad moving them to England, near the famous Stonehenge rocks.
Warrior faery Prince Zaneyr just wants to escape his father’s reckless plan to repair the Rift—a catastrophe that ripped the faery realm from Earth 4,000 years ago and set it adrift in an alternate, timeless dimension.
When Zaneyr tricks Finn into swapping places, Finn becomes bodiless soul stuck in the Otherworld, fighting spriggans with sharp teeth and rival faery Houses. Back on Earth, Zaneyr uses Finn’s body to fight off his father’s seekers and keep the king’s greatest weapon—himself—out of his hands. Between them, they have two souls and only one body… and both worlds to save before the dimensional window between them slams shut.
Faery Swap is an action and druid-magic filled portal fantasy, told by both a runaway faery prince and the boy he’s tricked into taking his place.

Here is one of the illustrations in the book: 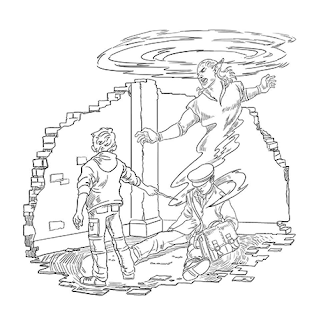 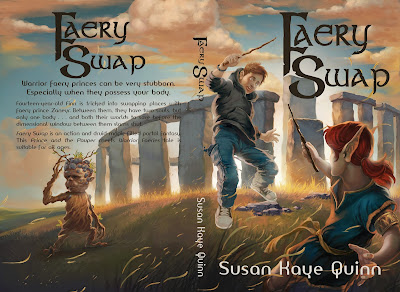 A few words from Susan…

Things I love about Faery Swap:
1. Warrior Faeries. Enuf said.
2. Ancient Irish Words and Spells
3. The idea that magick is enhanced by mathematickal knowledge, which faeries have to steal from humans to enhance their powers. (Yes, I’m sneaky that way with the maths.)
4. Alternating POVs of both Finn (the human) and Zaneyr (the faery)
5. Complete fish-out-of-water story: Human Boy Finn has to fight faeries in the Otherworld, and Zaneyr the Warrior Faery Prince has to figure out how to buy ice cream.

Q&A about Faery Swap
What gave you the idea/inspiration for this book?
– My inspirations often come on long drives by myself, and Faery Swap is no exception. I was brainstorming in the car when I dreamed up the idea of a faery swapping with a human and having a fish-out-of-water story for BOTH of them. Faery Swap grew from there.

What would you compare this book to? (another book, a movie, etc.)
– I absolutely adored Artemis Fowl (Eoin Colfer) – it’s one of the first non-Harry-Potter-middle-grade books that I read and thought, “Man, I would love to write a book like this!” So, the faeries in Faery Swap owe a debt of inspiration to the faeries in Artemis Fowl. They’re not quite as funny as Eoin’s faeries, but they make up for it in the inadvertent humor of being a faery in the modern world.

What is the main character like?
There are two main characters – the human boy Finn and the warrior faery prince Zaneyr – who are both in the wrong place at the right time. Finn is a human surrounded by angry faeries and creatures in the Otherworld, and Zaneyr has to navigate modern-day England… without his magick (most of the time). Faery Swap is a modern-day Prince and the Pauper story, where each finds that someone else’s life really isn’t always all it’s cracked up to be.

What themes do you address in this book?
One thing I sneak into the book is my love of math and science. I think a lot of kids think math and science are boring, or have no relevance to their lives. I – seriously – think math and science are near-magickal gifts that mankind has discovered. And not just because I have a Ph.D. in engineering! I think bestowing that sense of wonder in kids is important if we’re going to motivate them to seek out careers in these fields and keep pushing our advances in science and technology forward – and ultimately making the world a better place. In Faery Swap, the faeries come to Earth seeking the humans with the highest mathematickal knowledge – because to faeries, knowledge is literally power. It enhances their magick, their ability to manipulate dimensional space. I love the reverse parallelism there – instead of Prometheus stealing fire from the gods to bring to mankind, the faeries are stealing it back. I have no idea if any of that will resonate with my young readers, but I believe strongly in the power of myth and storytelling to deliver great meaning.

Is there more coming?
No, this is a stand alone book. I know series are the rage in MG, but this particular story is pretty self-contained. Unless an inter-dimensional faery visits me on the Solstice and convinces me otherwise…

Thanks for giving Faery Swap a try!