Today is my stop as part of the Waterborn book blitz by Kimberly James. 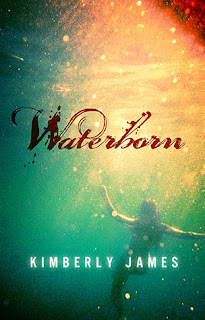 Blurb:
“You don’t have to choose. You can be both. The girl with the charm, the girl without. They both suit you.”

When her dad offers to take her to the Emerald coast of Florida for summer vacation, Caris jumps at the chance. The chance to get answers to questions she’s always been too afraid to ask. The chance to be normal. Isn’t that what her dreams have been telling her, that here in the place of her birth she can be normal? But from the first moment the wind caresses her face and the sun touches her skin, the charm begins to fade, revealing a girl Caris never knew existed, one that is anything but normal. The long-buried Song that awakens is only the beginning of a transformation that will challenge her ideas about loyalty and family.

Noah Jacobs is a waterbreather—a species of human fully adaptable to life in the water. Like his older brother Jamie, Noah wants to prove they can use their abilities and be heroes in service to their country. When a simple mission goes wrong and Jamie goes missing, Noah exiles himself to the Deep in a desperate search. MIA is a classification Noah is not ready to accept. But instinct can’t be ignored. Not when he hears her Song. Caris is not what he expects and Noah is determined to get her out of his head. Instead he finds himself acting as her mentor and the more time they spend together, the more Noah realizes he just wants Caris.

When a startling truth threatens their newly formed trust, Noah straddles the line between love and obsession while Caris struggles to find a balance between the girl she thought she was and the young woman she wants to be.

You can add Waterborn to your to-read list on Goodreads

Excerpt:
All my life I wanted to be like my mother, hoped I was like her. And now that I knew I was, the knowledge felt like a burden instead of a blessing. A dream turned nightmare.
As I stood on the beach, a few yards away from where the foamy waves rushed over the sand, I wished it weren’t true. Maybe my dad was wrong. Maybe my mother had been wrong.
My hope was dashed as soon as the Song came, easy and instinctive. Echoes built and swirled in my head like the breaking of so many waves. I felt the purpose of this Song in a way I hadn’t felt before. I recognized it for what it was now. What before had come as the result of wayward thought, produced by uncontrolled feelings, now came with a violent edge.
A command.
A part of me prayed he wouldn’t answer, that he wouldn’t succumb to the power even as it seemed to fill me with a sense of vitality.
Minutes later, Noah emerged from the surf, surrounded by the foamy break. He radiated power. Somewhere in the fog of my mind, I remembered his strong arms wrapped around me as he wrestled me from the force that held me to the bottom of the ocean. Was it because I knew what he was that I could see him so clearly, or was it that he no longer had to hide that part of himself from me? Did we all wear a charm of some sort? All I knew for sure was that no mere human had eyes like that. No mere human moved with such graceful strength as though he commanded the water itself.
Our eyes locked and held. We circled each other with wary steps. This wasn’t the same boy I’d rescued from a pack of bullies. This boy was wild, defiant and snarling silently, caught in this invisible trap of my Song.
Where did we stand? Yesterday I would have said we were friends. Now I didn’t know. He stopped an arms length away. Was he afraid to come closer? No wonder he had looked at me with such animosity before. He didn’t like it, having to come when I called. But despite that, despite what my dad had told me about my real father hurting my mother, I couldn’t believe that Noah would hurt me. I told him that day he’d rescued me from a pool of horseshoe crabs that he wouldn’t hurt me and I still believed that. Maybe even more now.
“Are you afraid of me now?” I would be lying if I said I didn’t feel a sense of empowerment, a tiny thrill that he was here only because I’d asked him to come with just a thought.
“No.” As if to prove it, he closed the space between us with one long stride, eyes intent, bold as they raked over me. I had discarded my dad’s t-shirt, eager to feel the wind on my skin, the spray from the surf. I wore my bikini top and bottoms, but I might as well have been naked the way Noah looked at me. Noah’s bare chest glistened with moisture and I had the absurd thought to rub up against him, let that moisture soak into my skin. Something must have shone on my face, some yearning I couldn’t name, because he shook his head and tiny drops of water rained down on me. I massaged them into my arms, let them drip down my face, craving more. They sang through my blood and every nerve ending in my body responded. Even my scalp tingled.
His eyes scoured my face, questions swimming in the green depths. But he also looked as if he too had no idea what happened next.
“How long have you known?” I couldn’t quite keep the edge out of my voice. The accusation. I knew this wasn’t his fault. The fault lie with my dad, but still, he had been keeping this from me. He should have told me.
“Since the first day I saw you.”
“The day behind the shops when Jax took your hair?” How had they done it? Cornered and trapped him like that? It didn’t seem possible, even though there had been three of them.
“No.” He averted his eyes. I watched his throat move as he swallowed. “Before that.”
Realization dawned. My first night here, when the water grabbed at me. I remembered the swell I’d felt in my chest, the Song that had burst through my head almost without me knowing.
I called him that first day, and he’d come, not knowing who I was. I didn’t want that kind of power over him. Yet, here he stood.
“Why you? I mean, there are others like you…” I gulped, still barely able to grasp the idea of another species, even with the proof of it standing in front of me. The proof of it humming under my skin. I still felt human enough, but Noah was definitely more. So unquestioningly, obviously more. “Like us. Why you?”
“I don’t know.” He said the words almost like a tired sigh, as though it was an unanswered question he’d asked himself over and over.
“So, we’re not really friends. It’s just this…” I waved my hand between us, not knowing what to call this connection we shared.
“I can’t speak for you, but I am your friend, Caris. I will always be that.”
My throat tightened and I looked away, not wanting him to see how his words affected me. They soothed the raw edge of my raging emotions. Grounded me to center when everything felt like it was spiraling out of my control. “You must hate me.”
His mouth quirked in a half smile. “No. I don’t hate you.”
Copyright 2013, Kimberly James

About the Author:
Kimberly is a Crossfit junkie and a connoisseur of french fries.

She likes to make stuff up and write it down. Her stories usually have a contemporary setting with a fantastical twist. Waterborn is her debut novel.

Kimberly lives in Alabama the beautiful with her husband, three dogs, Kevin the cat, and four new adults of her own. A couple of which are off at college.