Today is my stop during the book blitz for Sworn to Conflict (Courtlight #3) by Terah Edun. 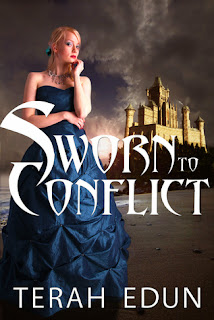 Ciardis Weathervane fought for the living dead and won. But worse than taking on a mass murderer, was her discovery that she had been deceived by her friends. Now she needs to not only fight a war in the North and survive, but also decide where she stands in the midst of competing sides.

A threat to all she holds dear lies in the North and her heart is not the only thing she might lose. A massive army awaits in the mountain pass, surging closer to the gates of the southern lands. Nothing the Algardis army has done so far has dissuaded their march forward and Ciardis finds out that her powers to enhance are needed now more than ever.

As she faces her greatest fears on the battlefields and her heart is torn between her love of Sebastian and loyalty to her family, Ciardis must choose her fate carefully. For in her path, lies the destiny of the empire. This third novel continues the story of Ciardis Weathervane from Sworn To Transfer.

You can buy it here:
– Amazon

Excerpt:
“Satisfied?” Sebastian said.
“No,” she said with a frown.
He opened his mouth to protest and closed it with audible click when she got up and moved so that her body was snuggled next to his and her arms were around his shoulders.
They said nothing for the moment. Ciardis felt the slow rise and fall of Sebastian’s bare chest under her hand. She was trying to avoid touching the angry bruise he had going down his right half.
She said, “I thought you had died, Sebastian. That you had left me alone. That we would never kiss again, never speak again, never touch again.”
He shifted his head slightly underneath her chin so that his head rested on her chest. “I’m sorry.”
“Sorry for what?”
“Sorry for worrying you,” he whispered.
“You should be.”
He laughed gently.
Shifting his head, he said with hope in his voice, “Speaking of kisses…”
She swatted his shoulder. “No.”
“But—”
“No, the healer says you need to rest—”
“But I feel fine,” he whined.
“Go to sleep, Sebastian,” she whispered. “There’s much to do tomorrow.”
“Will you be here?”
“I will.”
As he drifted off she laid a chaste kiss on his hair and a single tear dropped onto his head. Gripping the Prince Heir tightly, she, too, drifted off to sleep.
When she woke it was because of noise outside of the tent.
A guard was whispering, “Prince Heir Sebastian. Lady Weathervane. The major is here to report to you.”
Ciardis shifted, preparing to rise up and tell them that the Prince Heir was still resting.
Sebastian beat her to it. “Come in.”
She still stood up. Sebastian groaned at the removal of her presence from his bed.

The major cleared his throat and entered the room.
He nodded briefly to Ciardis. “Four hours have passed, sire. It is approaching the early evening. We lost two hundred men in the skirmishes, with many more wounded.”
Sebastian nodded and with a wince sat up in the bed. Ciardis moved forward as if to stop him, and he said, “No, I need to see to the wounded, Ciardis.”
“Besides,” Sebastian said casually, “if I collapse again, at least it’ll be in the healer’s tent.” 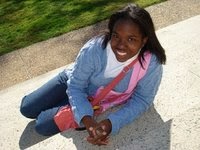 Terah Edun is an international development professional and author/lover of all things Young Adult Fantasy fiction. She is a native Georgian, adoptive Washingtonian, unrepentant expat currently living in South Sudan, brilliant dreamer, lover of dogs and not-so-closet geek. Her first novel, Red Madrassa, was released on November 8th and her second novel, Sworn to Raise, comes out in April 2013.

There is a giveaway for an e-copy of Sworn to Conflict on my blog:
a Rafflecopter giveaway

And there is a tour wide giveaway: