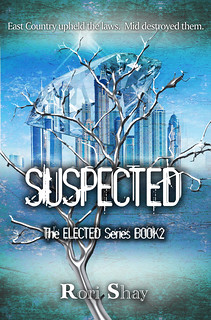 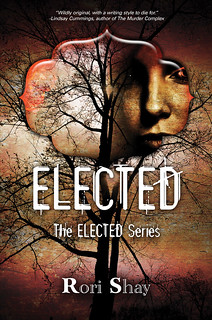 As she struggles to lead, Aloy maintains her cover by marrying a woman, meanwhile battling feelings for the boy who knows her secret—the boy who is somehow connected to her country’s recent upheaval. When assassination attempts add to the turmoil, Aloy doesn’t know whom to trust. She understood leadership required sacrifice. She just didn’t realize the sacrifice might be her life.

You can read my review of Elected here.

You can find Elected on Goodreads

Excerpt:
I bend down and brush dirt off the tender petals of a few plants. The sun beats down on my uncovered head. The air has grown hot now, in stark contrast to the unwavering cold of one month ago. I’m not sufficiently prepared to work outdoors in the garden, but I lose myself in caring for Margareath’s plants. I stay there longer than I should, the harsh rays of the sun starting to burn my neck.
“You should take more caution,” says a voice over my shoulder.
I don’t look up, already knowing who it is.
“What do you care?”
“I care a lot,” says Griffin.
He gives the two guards who are watching me through the garden gate a curt nod, relieving them of duty. The guards bow in my direction and make themselves scarce. Griffin and I are alone for the first time in a long while, but I don’t look at him. I keep my hands deep in the dirt of Margareath’s garden, pulling at a rock that just won’t come loose.
“Here, let me help,” he says, squatting down next to me. He holds his hands out, meaning to dig the rock from the earth. Our fingers touch, just the slightest inch of his skin brushing against mine, and I’m paralyzed with the sensation.
“No, don’t!” My voice comes out like a bark. “I don’t need your help.”
He eases up, rocking back on his heels and then standing. “Well, it looked like you did.”
“Don’t let this little stone fool you. I don’t need you.” I yank on it hard until it puckers from the ground and tumbles into my hand.
“You certainly need me for something,” he grumbles, angst in his tone.
I stand up fast, the blood rushing to my head. I’m wobbly on my legs but I overlook the feeling, too angry at Griffin to notice my own body’s needs.
“Yes, over and over again, like you said,” I hiss.
“Yes, that.” Griffin looks down at the dirt on the ground between us.
“Why did you have to rub it in? Over and over again?”
Griffin sighs. “I wanted you to be mad enough to change your mind.”
“You could have refused either way. Everyone is free here.”
“It’s like Vienne says, though. If you need something desperately, you know I won’t refuse you.” He pauses for a moment, looking up at the high sun instead of at me. “And yet you ask this of me, knowing I will ultimately do what you want.”
My barrier of anger falters slightly. “I need this, yes, but that doesn’t mean I want it. The thought of you and Vienne…”
My voice falls off. I can’t finish my sentence.
“The thought of us making a baby together makes you want to choke, to throw up, to keel over, your stomach lurch?”
Yes. How does he know me so well?
“And does it elicit the same reaction in you?” I ask, knowing already any answer other than yes will cause me to wilt in this hot sun, the same as the plants on the ground in front of us.
Griffin doesn’t answer for a moment and instead looks down at Margareath’s garden. “To tell you the truth, the physical act of being intimate with Vienne doesn’t bother me in that same way. She’s a beautiful woman. Any man would want her.”
He’s just voiced my exact worry. I kick up the dirt in billows, knowing this is the ultimate truth. He will enjoy this. He will fall in love with her.
“But,” he says, “the thought of what this does to you… that I’d rather be intimate with you… how even though you’ve requested this, you’ll hate me for it. That turns my stomach.”
He catches my face in his hands, and before I know it, Griffin’s kissing me. It’s like a million fires spontaneously crackling as his embrace grows deeper. Like a wave of water crashing down on my body. Like I am on the ground but floating at the same time.
I kiss back, my lips working perfectly with his in an amazing symphony of rhythm. All of my questions about what gender I like, or if I even want to feel someone’s touch, are answered in a split second. I know I’m trying to leave a passionate impression on him, so I have a slightest chance of Griffin remembering me after being with Vienne. I take in the taste of his lips on mine, the feel of his warm hands as they grasp my upper arms in the embrace.
After what feels like mere seconds and eons all at once, I hear a bird in the distance caw. It breaks my concentration enough that I reluctantly take a step back. We may have relative privacy, but what we’re doing still isn’t safe. I cough, stepping back from Griffin and look up at the sky instead of meeting his eyes.
“We shouldn’t,” I say.
Griffin slowly lets go of my arm and rubs one hand over his forehead. “I came here to tell you Vienne and I will be together tonight. I thought you deserved to know. I will be… as fast as possible.”
I turn red at the thought. My next words are stilted, caught in my throat. “Thank you… for the heads up.”
He nods, mouth set in a grim line. “I guess I’ll see you around.” Griffin brushes a strand of hair from his forehead. It refuses to budge, clinging to his skin in a moon shaped curl. I want to brush it away for him, but I hold back.
I blink, trying to block out my feelings as Griffin starts to walk away, out of the enclosed garden. Then he turns and his whispered words burn a hole into my heart.
“You know, we could make love too.” 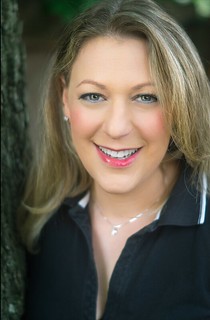 About the Author:
Rori Shay is a strategic management consultant living in the Seattle area with her family, black lab, and cat. In the writing world, Rori is primarily know for her science fiction trilogy, The Elected Series. She enjoys running, reading, snow-shoeing, pumpkin-picking, and right now…writing the third ELECTED novel! Rori is also a member of the Society of Children’s Book Writers and Illustrators (SCBWI).

There is a tour wide giveaway for the book blitz of Suspected. This giveaway is US and Canada only. These are the prizes you can win:
– a kindle ereader and a signed copy of Elected by Rori Shay