Today I am participating in the book blitz for Someone Like You by Karen Rock. I am currently reading this book, so my review will follow somewhere in the next few weeks. Today I have an excerpt of the book to share with you and there’s a tour wide giveaway! 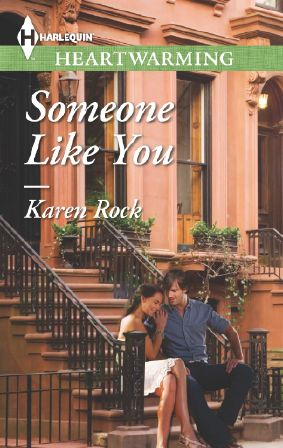 Excerpt
“I don’t need to be around other people,” he said drily, his gaze never leaving hers. “Except you.”
Heated blood rushed through her. That was treacherous thinking—for both of them. “But if you used the app, you’d find the right girlfriend. Want to be with her. You can’t waste your time on someone like me. I’ll never be more than a friend.”
He closed the distance between them in one stride and eyed her. “Sure about that?”
And suddenly, he pulled her into his arms, his strong body enfolding her. His lips lowered then paused, his heated eyes questioning. Was he waiting for her to refuse him?
Her bones melted against him, and her resolve to keep things professional crumbled. She wanted this kiss as badly as she’d ever wanted anything. She stretched up on her tiptoes and heard him groan as his lips swept down and captured hers, the caress as feather soft as the dragonfly’s wings.
He pulled the band around her bun loose, and her hair tumbled down her back, his hands burying themselves in it. When he deepened their kiss, his mouth slanting firmly against hers, her skin heated. Their hearts pounded together, and she breathed in his minty breath, tasting the strawberries they’d eaten earlier. Wanting him closer, she traced his bunching back muscles, loving their hardness and strength.
When his lips left hers and traveled along her jaw, she fitted herself against him closer still, needing to feel all of him. As his lips slid along her earlobe then down her neck, the world tilted and spun madly in the wrong direction.
She cupped his face and brought it back to hers, wanting his mouth again, the caress deepening into a demanding kiss that left her breathless and clutching on to his shoulders when her knees weakened.
At last he stopped, and they stared at each other, chests heaving, breath coming in fits and starts.
“Still sure?” he murmured, his eyes searching hers. Struck dumb, she nodded automatically, her gesture making him scowl, disappointment in his eyes. When he strode out of the pavilion, her fingers traced her swollen lips
How had she let that happen?

About the Author:
Karen Rock is an award-winning YA and adult contemporary author. She holds a master’s degree in English and worked as an ELA instructor before becoming a full-time author.  With her co-author, Joanne Rock, she’s penned the CAMP BOYFRIEND series with Spencer Hill Press under the pseudonym J.K. Rock. She also writes contemporary romance for Harlequin Enterprises. Her wholesome romance, Heartwarming novels have won the 2014 Gayle Wilson Award of Excellence and the 2014 Golden Quill Contest. When she’s not writing, Karen loves scouring estate sales for vintage books, cooking her grandmother’s family recipes and hiking. She lives in the Adirondack Mountain region with her husband, daughter, and two Cavalier King cocker spaniels who have yet to understand the concept of “fetch” though they know a lot about love. To find out about her upcoming releases, appearance and latest news, visit her.
She’d love to connect with you!
– Website
– Facebook
– Twitter
– Goodreads
– Pinterest

2 responses to “Book Blitz: Someone Like You by Karen Rock”