Today is the re-release of Instinct by JA Belfield. Instinct is a prequel novella that shows an importantant bit of background and history of this series. I read and reviewed this book long ago, but my review is so cringe worthy I decided not to re-post it and just talk about the book itself. I am a big fan of this series and the author does a great job making the world come even more alive with all these extra novella’s and it’s free, so make sure to grab your copy! You can read an excerpt of Instinct in this post and enter the giveaway! 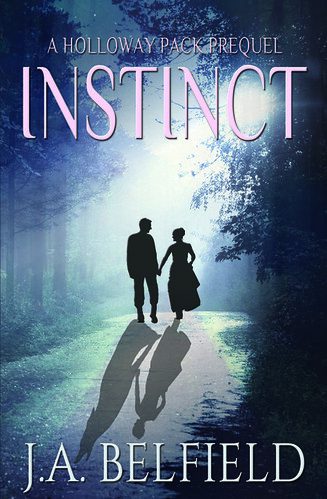 Blurb:
Werewolf Sean Holloway treats the village marketplace like a sexual buffet, though his charm does little to win over his latest entrée of choice. Whether because of Jem Stonehouse’s unique scent, her headstrong nonchalance, or the fact he is forbidden to see her by his pack’s rules, Sean wants her.

When Jem is nothing but flippant toward his advances, he pursues her with vigour, stealing moments alone with her without a libido-driven agenda.

The new and heady experience for him drives their relationship beyond romantic interest, and straight toward love.

That is, until Jem learns the truth about Sean’s heritage. Knowledge of the existence of werewolves leads to only one outcome: death.

In this prequel to Darkness & Light*, we are taken back in time, to the very beginning of Jem and Sean’s love-across-the-centuries relationship.

Did it end there? Or did Sean defy his own pack to save the woman he loves?

*Can be read as a standalone.

You can add Instinct to your to-read list on Goodreads. 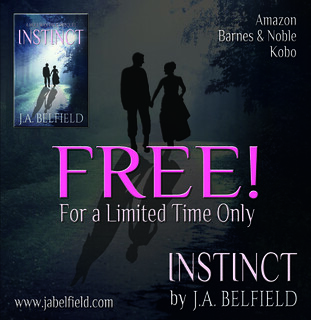 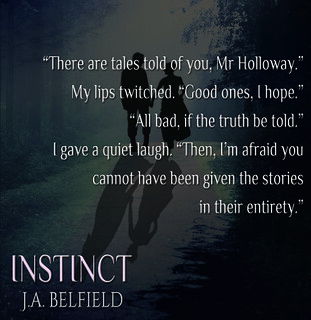 The marketplace had to be the best venue to pick up females. At the age of twenty, I would have been happy to visit every day, but James would not permit me. As Alpha, his commands were followed without question, so my visits were limited to once a week. I had to admit, it worked out better that way.

From fruit to art, to lace, to the blacksmith’s stall, I walked. Paintings of marketplaces often depicted them as cheery, colourful, and bustling with activity. The latter conception may have been correct; although, they leaned more toward grey and dreary than bright, and the air often filled with yells of anger and bitterness, as opposed to joyful greetings.

At least there were the scents: hams and boars’ heads, fruits, wines, the steam of cooking soups, and, my most favourite of all, the freshness of ripe women. Lorna Rushford, Helena Longbarrow, Matilda Thornberry named only a few, each of those alone bringing with her a memory.

The females noticed me as much as I did them, even though my past catches never approached, never asked why I had not called to visit, or if I would tend them again. Of course, my refusal to conform to the current trends in attire ensured I stood out from the other males who bothered to arrive. Whereas the women’s glances would be appraising, perhaps even hopeful, the men’s glares offered nothing but scorn for my dark trousers tucked into knee-high leather boots, and for the shirts I never bothered to secure with their woven laces. Men had been hung for far less than inconsiderate fashion sense, yet I did not care. I was not like them and never pretended to be.

A whisper drifted across, as I meandered through the crowd: “’Tis Mr Holloway, Eleanor.”

With a tilt of my head, I spotted the speaker leaning into her sister, who fluttered her lashes in a clear attempt to catch my attention.

Eleanor had turned out to be a worthy virgin. The scent of her blood had driven me wild as I had plunged into her.

I smiled to myself as I turned away.

Farther along, pausing to sample the crisp apples, I caught Mrs Lawson’s scent. The older ladies may not have been as pure, but they could not be denied their eagerness to please. For that reason alone, they made for an entertaining afternoon.

My nose lifted to track her, and I found the woman beyond a table stacked high with fresh loaves, hidden behind her fan, which she waved with vigour. I recalled that her petticoat had held many layers, and the removal of them turned out to be almost as much fun as the act itself. I wondered how she had explained the damage to her pompous husband.

At a new aroma begging for notice, my step faltered as my nostrils flared.

Strong, yet understated, alluring and seductive, the unsullied flavour carried the exceptional deliciousness of womanly musk. Possessed by a need to find the source, I tilted my head and allowed my nose to lead.

It should have been difficult, impossible even, to locate such subtlety amongst the overpowering wafts of food and body odours, yet the strong pull beckoned to me, drawing me on.

Whispers continued, as I passed one stall after another, but they no longer held my interest. My mind seemed only able to focus on the unfamiliar scent. Although it intensified with each step, I half wished for a stronger breeze to invade the clear morning, to bring me a more wholesome dose and appease my sudden and unbidden greed.

My eyes shifted, as I moved, searching. I skimmed over those who held no appeal, the ones whose flavour had already been tasted, until, at the end of the row ahead, I spotted two young women.

From the angle of their positions, I doubted they could see me. The purchasing of herbs distracted the darker haired of the two. Animated, she possessed a flamboyance which showed in her movements, and in her pleasant tones, as she bartered with the stall owner.

I imagined she would get her own way with the price.

To her side stood a fairer female, with a quiet calm that showed in the relaxed set of her shoulders. Taking a step closer, I studied her.

Appearing younger, almost lacking in confidence, she was also somewhat taller and certainly far more beautiful. I did not recognise her, yet could not mistake her scent. I had been tracking it for the past five minutes.

Leaning across the jewellery on the stall beside me, I caught the proprietor’s attention. “Who is the girl?” I asked, pointing toward the one who held me so rapt.

“Regular of mine.” He nodded and smiled. “The Stonehouse sisters often purchase my quartz and amethyst.”

As he spoke their name in a conspicuous overtone, the females turned.

Blue eyes, as dark as sapphires, appraised me from beneath wisps of blonde, and a smile widened the girl’s lips, as my own mouth curved at the corners.

Beside her, the darker girl leaned into the fair tresses of her sister. “Sean Holloway is a ladies’ man and not to be trusted,” she hissed, her words carrying to me with ease, before she walked off. When her sister remained, gaze locked with mine, the seemingly older girl called out, “Come along, Jem. Mother is waiting.”

With her attention tugged back toward her departing sibling, she dipped her head and followed behind.

Still, the essence her body had left in its wake lured me, and, unable to do otherwise, I trailed after her.

And there’s a giveaway for a chance to win a $10 Gift Card + an ecopy of Eternal, the sequel novella to Instinct.