Today I am part of the book blitz for Immagica by KA Last. I really like the sound of this book and I was also part of the cover reveal. In this post there is some more information about this book, an awesome guest post by the author in which she explains the magic in Immagica, an excerpts of the book and there are two giveaways, one giveaway for an e-copy of Immagica and a blitz wide giveaway for 3 signed swag packs. 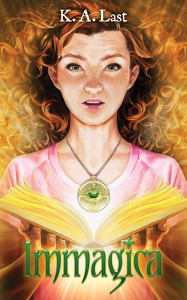 Blurb:
Immagica…
Where anything is possible.
Enter at your own risk.

The night before her fifteenth birthday, Rosaline Clayton uncovers a deep family secret. She receives an amulet from her deranged father, and he tells her she must find the book in order to save him. Rosaline is used to her dad not making any sense, so she dismisses their conversation as another of his crazy rants.

When Rosaline’s brother, Elliot, drags her to their nana’s attic to explore, they find the old leather-bound book tucked away in a chest. It sucks them into its pages, transporting them to a magical world. Along the way, Rosaline and Elliot are separated, and the only thing she wants is to find her brother and go home.

The creatures of Immagica have other ideas. After years of war, their land lies in ruin. Using the amulet’s power, they want Rosaline to defeat the dragon and restore Immagica to its former glory. But Rosaline is bound to Immagica in ways she doesn’t understand, and when she discovers the truth about her family, she must follow her heart to save them all.

The Magic of Immagica Explained
When we think about magic, we often visualise witches and wizards with wands, casting spells and striking people down with lightening. But the magic within Immagica is very different, and works in a non-traditional, magical way.

The concept of Immagica is based on the power of imagination. Within our imagination, anything is possible. We can create whatever we want, and see it however we like, all inside our own mind. No wand or spell necessary.

The land of Immagica is very organic. It can be shaped and tailored for whoever is there at any given time. There are, of course, certain things that remain the same, but everything else is open to interpretation, and governed by the imagination of the person experiencing the adventure.

Like anything, there are certain rules, but some rules are made to be bent or broken. The magic of Immagica can be unpredictable, because Immagica itself is alive. It actually has a say in everything that is created, and the events that happen. It’s like having someone looking over your shoulder, nudging you in a certain—but not always right—direction. Imagination plays a major part in shaping Immagica, but the subconscious of the person visiting is also at play. 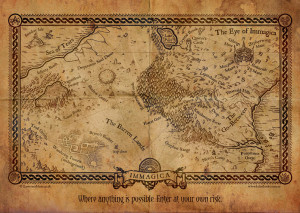 There are two main sections of Immagica. If you have a look at the map you’ll see there’s the Barren Lands, which encompasses all the not so nice places, and there’s the Go-Between, which is a friendlier place, but not always. In the Barren Lands, the weather changes depending on your mood. Get angry and a thunderstorm can brew in a matter of seconds. In the Go-Between you have more control over things, but your emotions, subconscious and mind are all working either with or against each other.

Although the concept of magic by imagination is a relatively simple one, it can sometimes get confusing in the way it works. This is mainly because nothing is set in stone, and something that happens one way for someone can work in a completely different way for someone else. Read these excerpts where Brynn attempts to explain to Rosaline the way Immagica works, and see if you can make sense of it. I think Rosaline had a hard time grasping the concept.

It certainly sounds like the magic in Immagica is different than in most other books. I always love getting a view or explanation about world building in a guest post, so that’s why I choose this one for my post. And now for an excerpt of Immagica.

Brynn got up and went to the other side of the room. From the shelf above the weapons she pulled down a piece of old yellowed paper, and a pencil. She sat back at the table and drew an image resembling the shape of the amulet. The eye was in the middle, and thick lines came out to form the compass points around it. She even included the intricate lines that lay between the eye and the edge of the circle. She then drew an uneven area around the completed compass, making it larger around the northern point. Beyond that, Brynn created another space that almost touched the edges of the paper.

“This is Immagica, and we are here,” she said, indicating a spot in the south, farthest away from the compass. “We are in what’s called the Barren Lands. On the outskirts of the Barren Lands lie the Sea of Tears, Dragonblood Swamp, and Desperation Sand Dunes. But you won’t have to go there, it’s in the wrong direction.”

“In the Barren Lands the ground is always bare and rough, but the sky changes depending on your mood. You can be your own undoing out here as the spirit feeds off you. The more desolate you feel, the worse it gets, and the only way to control it is to control your emotions. I’m actually surprised the sky stayed blue so long for you.”

“This place here is the Go-between.” Brynn indicated the uneven area outside the compass. “It holds the nicer parts of Immagica: Runetree Woods, Rainbow Drop, Emerald Hills—you get the idea. Things are a little more controllable there. For a start, the weather doesn’t react to your mood, but you still need to be careful. While the Barren Lands feed from your emotions, the Go-between feeds from your mind, and subconscious. In Immagica, all your dreams—and nightmares—can come true.”

What she was telling me did sound pretty interesting, and despite myself, I leant closer to look at the crude map she’d drawn.

“Do you mean if I think of something, it becomes real?”

“That’s exactly what I mean. But it’s not as simple as just thinking something, and it appears. You have to want it, but Immagica also has to want you to want it. Sometimes Immagica will want you to have a different version of what you wanted in the first place.”

“You are not making sense—again,” I said. “Did you just have tea with the Mad Hatter?” 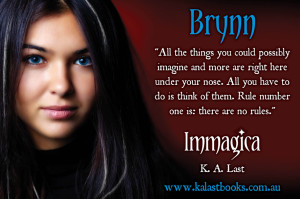 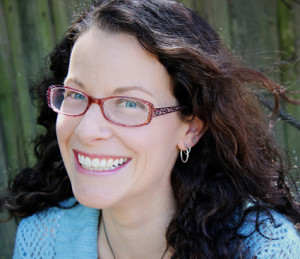 K. A. Last was born in Subiaco, Western Australia, and moved to Sydney with her parents and older brother when she was eight. Artistic and creative by nature, she studied Graphic Design and graduated with an Advanced Diploma. After marrying her high school sweetheart, she concentrated on her career before settling into family life. Blessed with a vivid imagination, she began writing to let off creative steam, and fell in love with it. K. A. Last is currently studying her Bachelor of Arts at Charles Sturt University, with a major in English, and minors in Children’s Literature, Art History, and Visual Culture. She resides in a peaceful, leafy suburb north of Sydney with her husband, their two children, a rabbit named Twitch, and a guinea pig called Squeak.