Today is the release day and the start of the book blast for Earth Dwellers, the 4th book in both the Dwellers series and the Country series by the awesome David Estes. First I share my review with you. Then there is something really awesome: a free code to grab your own copy of Fire Country. Trust me this is a series you want to read. 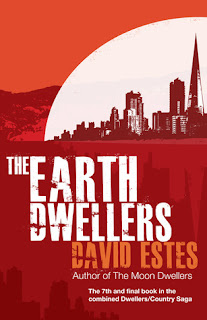 Blurb: The Earth Dwellers is the 4th book in BOTH The Dwellers Saga and The Country Saga. The author recommends that BOTH series are read in their entirety before reading this book (The Moon Dwellers, The Star Dwellers, The Sun Dwellers, Fire Country, Ice Country, Water & Storm Country).

Your favorite Dwellers and Country Saga characters come together in this epic seventh book!

As President Borg Lecter threatens to annihilate the Country tribes in order to expand his glass-domed empire, Adele ventures into the belly of the beast. Her only hope of survival is the consolidation of Dwellers and Country power before it’s too late.

Former demagogue President Nailin is eliminated, yet civil unrest infects every alliance. To save Adele, President Tristan faces his greatest challenge yet: unifying unfriendly Dwellers in the Tri-Realms to raise an army against Lecter. Meanwhile, Dazz must convince the Ice Country leaders to march with Siena and the Tri-Tribes on the gates of the Glass City.

The world sits on the edge of a knife. Will Adele, Tristan, Dazz, and Siena defeat Lecter and his army of killers before the Glassies wipe them off the face of the Earth?

My Review:
I got a copy for review in exchange for beta read and an honest review.

The Earth Dwellers seamlessly combines the Dwellers and the Country saga and the end result is a great story with the best of both series. It’s the perfect ending to both series and it was awesome seeing all my favorite characters again. Even Perry made a cameo appearance!

I really liked both the Dwellers series and the Country series and when I first heard about that there would be one book that would be the fourth book to both series I was beyond excited. I never read another book that did this and I was so excited to start it I almost didn’t dare to start reading for fear of being disappointed. But this book does not disappoint at all, it was better than I expected or even hoped. I loved seeing this new perspective to both stories, to see how the Tri-realms and the Tri-tribes saw each other.

I couldn’t be more happy with the choice of point of view. Siena is one of my favorite book characters and I was really glad she was one of the point of views of this book. The other half of the story is told mainly by Adele, but there are also a few chapters from Tristan and Dazz’ point of view. I loved seeing all these characters back and I loved how seamlessly the two worlds and series where combined.

There are some heartbreaking moments in this conclusion to both series. I almost cried a few times. And one time I got goose bumps all over because there is this scene that shows so much strength and it was so awesome and it displays how great the strength of people can be. Courage and hope. It was awesome. And the ending wraps most of it up so nicely, while it still left me wanting more. I just wished the epilogue was longer, because I am not ready to say goodbye to these characters and this world and I am so sad that this series has ended, but on the other hand this book is the perfect ending.

I was surprised how much more world building this last book in this series contained, because even after 6 books there is still a race we know almost nothing about, namely the Glassies also known as the Earth Dwellers. And there is still a lot of world building and getting to know this society and it almost felt like starting a new dystopia book. Although I would’ve liked getting a more insider perspective and getting to know even more about this society and the people who lived there.

To conclude: I loved this book, it seamlessly combines two series and gives both series the perfect ending. It is full of emotion and heartbreak and goose bumps. I loved seeing all my favourite characters back and I think it’s wonderful there even is quite some world building in this last book. And even though I am sad that this is the last book in this series, it is a great ending!

To celebrate the release of The Earth Dwellers by David Estes, the fourth book in both The Dwellers series and Country Saga, David is giving away UNLIMITED free eCopies of Fire Country, book one in the post apocalyptic, dystopian, Country Saga. A little over a year ago, David published his first young adult dystopian series, The Dwellers, and it has changed his life forever. Since then, he’s gone from struggling Indie author to fulltime writer, he’s watched in amazement as his Goodreads fan group has swelled from 300 members to over 1,600, and growing. He’s been featured on Buzzfeed, as one of the ’15 Book Series To Read If You Enjoyed The Hunger Games’, and has just signed on to Andrea Hurst and Associates literary agency. Andrea will we working with David to expand both the Dwellers and Country Saga, taking David’s career to a whole new level.

So before the two series collide in The Earth Dwellers, grab the coupon code below and download your eCopy of Fire Country from Smashwords. Share the code with your family, friends and literary inclined pets. The only thing David asks for in return is that if you enjoy the read and continue on with the series, to please leave a positive review on Amazon.com, Goodreads and blogs for each of his books that you read.

The Earth Dwellers will cap off an eighteen month journey that has taken me from unknown Indie author to still-mostly-unknown fulltime Indie author. The change is a subtle one for most people, but for me it’s a dream come true. To the hundreds (and now maybe even thousands!) of readers who have come along for the ride with me, either by reading the Dwellers Saga, the Country Saga, or both, I thank you from the bottom of my heart.

David Estes was born in El Paso, Texas but moved to Pittsburgh, Pennsylvania when he was very young. He grew up in Pittsburgh and then went to Penn State for college. Eventually he moved to Sydney, Australia where he met his wife and soul mate, Adele, who he’s now been happily married to for more than two years.

A reader all his life, David began writing novels for the children’s and YA markets in 2010, and has completed 13 novels, 11 of which have been published.  In June of 2012, David became a fulltime writer and is now travelling the world with his wife while he writes books, and she writes and takes photographs.

David gleans inspiration from all sorts of crazy places, like watching random people do entertaining things, dreams (which he jots copious notes about immediately after waking up), and even from thin air sometimes! Recently he’s been inspired by some of his favorite authors, like Suzanne Collins, Veronica Roth, and Maggie Stiefvater.

David’s a writer with OCD, a love of dancing and singing (but only when no one is looking or listening), a mad-skilled ping-pong player, an obsessive Goodreads group member, and prefers writing at the swimming pool to writing at a table.  He loves responding to e-mails, Facebook messages, Tweets, blog comments, and Goodreads comments from his readers, all of whom he considers to be his friends.

And there is a book blast wide giveaway!
a Rafflecopter giveaway