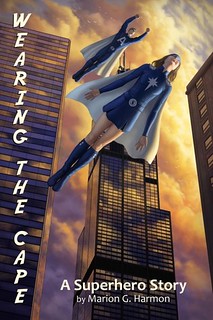 Blurb:
Who wants to be a superhero?

Hope did, but she grew out of it. Which made her superhuman breakthrough in the Ashland Bombing, just before starting her freshman year at the University of Chicago, more than a little ironic. And now she has some decisions to make. Given the code-name “Astra” and invited to join the Sentinels, Chicago’s premier super-team, will she take up the cape and mask and become a career superhero? Or will she get a handle on her new powers (super-strength has some serious drawbacks) and then get on with her life-plan?

In a world where superheroes join unions and have agents, and the strongest and most photogenic ones become literal supercelebrities, the temptation to become a cape is strong. But the price can be high—especially if you’re “outed” and lose the shield of your secret identity. Becoming a sidekick puts the decision off for awhile, but Hope’s life is further complicated when The Teatime Anarchist, the supervillain responsible for the Ashland Bombing, takes an interest in her. Apparently as Astra, Hope is supposed to save the world. Or at least a significant part of it.

You can find Wearing the Cape on Goodreads

You can buy Wearing the Cape here:
– Amazon
– Barnes & Noble

Read the first 13 chapters for free on Amazon and Kobo

Excerpt from Wearing the Cape:
Cape (plural capes): literally, a sleeveless garment hanging from the neck over the back and shoulders; figuratively, a superhuman who has chosen to act as a superhero. Synonyms: hero, mask, super, superhero. Connotations: ‘cape’ is used as both a familiar and derogatory term for superheroes, who often casually refer to themselves as capes but generally consider it a demeaning term when applied to them by the press.

My day had started normally enough. I gulped coffee and grabbed scorched toast, exchanging kisses with Mom on the way out the door. The September chill nipped around the edges of my coat and at my legs, making me glad I’d worn tights under my skirt. Driving one-handed, I scanned my schedule with the other: I’d be playing Mom’s Girl Friday at the gallery, getting ready for Thursday night’s foundation event. Julie had texted; she planned for us to take the University of Chicago by storm our first year, and wanted us ready by Orientation Week. We’d ruled Oak Park High till graduation, and she didn’t see any reason our college years should be different.

I passed a gray Suburban and the red headed munchkin in the back seat waved at me while her mom talked business on her hands-free cell. I stuck out my tongue, making her laugh, and my epad launched into Julie’s new call theme: the U of C fight-song. Wave the flag of old Chicago—

Overhead explosions shattered my thoughts and I looked up to see blooms of blasted concrete and falling bridge. I screamed and ducked, lost control. The car slid. A flash of yellow and I hit something hard. I screamed again at the second, world-ending shock as falling roadway flattened my car. The tires blew. The buckled roof hit my head and flying glass stung my face as my vision exploded in fireworks. Choking off the scream, I found myself lying stretched across the front seat, the gearshift digging into my stomach, in smothering darkness. I tasted blood on my tongue.

Alive. I was alive.

The car roof pushed down, inches above my head as I lay there in the dark, my seat belt cutting off my air. Lightheaded, clawing blindly, I unbuckled but still couldn’t breathe without choking. Cement dust. Pulling my coat open I yanked my sweater up, taking shallow, sobbing breaths through the wool and fighting to think around the rising fear.

But would it come in time?

What about the munchkin and her mom? Were they under the road now? Could they wait, if they were alive? I choked on panic as thick as the dust. I had to get out. I had to know. They had to be alive.

Gasping, pulse pounding, I pushed against the roof above me and felt something deep inside me change. Cold fire ran through my bones. I shrieked and my next breath filled me with the whole world. Tearing through the crushed roof of my car, I heaved aside the chunk of roadway above my head as easily as clearing cheap drywall, stood, blinking at the disaster around me, and saw what had saved me; I’d slid into a huge earth moving machine traveling in the next lane and it shielded me. Around us, cars had fallen with the span and lay broken among shattered chunks of road and twisted steel frame. Dust-clogged air carried the smell of spilled oil and gas, the first bite of burning rubber. A white sedan screeched to a sliding stop at the north end of the broken bridge. The world went far, far away as I looked at my shaking hands, unable to believe what I’d just done. 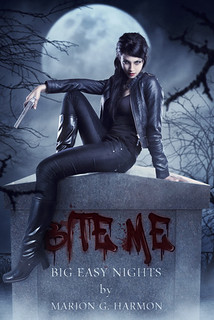 Blurb:
It was supposed to be a working vacation…

For Jacky Bouchard (aka, Artemis: vampire, former night-stalking dark avenger, and reluctant superhero), a trip to the Big Easy was a chance to solidify her new Bouchard identity, meet the grandmother she didn’t know she had, and do a favor for the New Orleans Police Department by helping them keep an eye on their local vampires.

Watching a bunch of fashion-obsessed goths with fangs should have been easy, but now she’s dressing in black and sleeping in a coffin even though living the whole Fiend of The Night stereotype makes her want to vomit. And for someone working undercover, she is getting attacked a lot. When Jacky learns that a master vampire capable of siring progeny with his blood (an urban myth—vampires don’t reproduce that way) may be haunting New Orleans, she decides to go hunting. But the streets of the French Quarter are dangerous when you don’t know who is hunting you, and Jacky finds herself in trouble up to her neck and needing all the help she can get…

You can find Bite Me on Goodreads

You can buy Bite Me here:
– Amazon
– Barnes & Noble 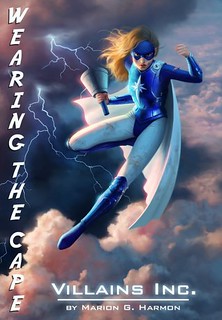 Blurb:
Astra has finished her training and is now a full-fledged Sentinel, but things are not going well. She suffers from Post-Traumatic Stress Disorder, and the public revelation of her relationship with Atlas has caused her popularity to nose-dive.

To complicate things, the Teatime Anarchist’s intervention has changed the course of events–leaving her with lots of knowledge about the way the future was before the Big One, a complete future-history that is now out of date.

And just when she thinks she’s getting a handle on things, unfolding events (a bank-robbery and a horrific murder) show that one of the nastier pieces of the old future isn’t so out of date after all; unless she solves a murder before it happens, Blackstone is going to die.

You can find Villains Inc. on Goodreads 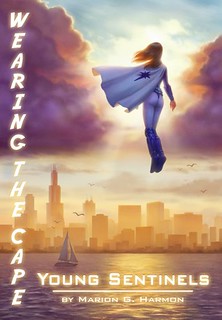 Blurb:
The reward for a job well done is another job.

After the Sentinels’ takedown of the second incarnation of Villains Inc., things are relatively quiet in the great metropolis of Chicago. Astra, aka Hope Corrigan, is able to breathe a little, to hang out with her friends, and even to attend classes (where her professors are starting to think she is a myth). But Blackstone is loading more training and responsibilities on her, and converging events threaten the compromises she has made to balance her superhero career and student life and to protect her family and friends.

Worse, a new supervillain has come to town, and it will take all of Chicago’s capes to defeat the threat of the Green Man — if he can be defeated at all. When a new supervillain group begins targeting anti-superhuman groups, it becomes apparent that even the Sentinels are going to need help.

Because one thing is certain: Chicago is going to have a very bad day.

You can find Young Sentinels on Goodreads 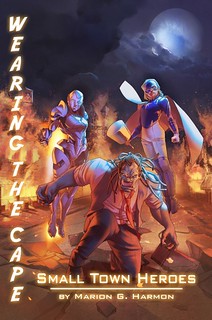 Blurb:
Astra has become one of the most popular Sentinels in Chicago, past scandals notwithstanding, and is now the team leader of the Young Sentinels. But on their first big solo outing, the new junior Sentinels fall into a new scandal—one which could cost them the team. And Astra has a dream visit from Kitsune, the odd shapeshifter-thief who precipitated the battle between the Sentinels and Villains Inc. the year before. The dream warns of a fresh disaster, in a town Astra has never seen before and that may not actually exist.

Astra’s efforts to find the town from her dream leads to her “recruitment” by the shadowy Department of Superhuman Affairs, and she leaves the team behind in Chicago to learn more about the DSA’s secrets than are good for her, face old enemies, and discover a little town called Littleton. Fortunately for Astra, “leaving the team” does not mean she’s on her own.

You can find Small Town Heroes on Goodreads 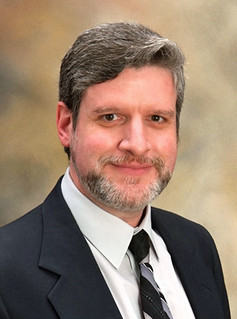 About the Author:
Marion G. Harmon has read and written all of his life (well, ever since first grade). He finished his first novel, Wearing the Cape, in 2010, and after failing to find an agent who knew what to do with a superhero story, decided to self-publish (mainly so he’d stop rewriting the book). He published through KDP and Createspace in mid 2011 with some success; Wearing the Cape earned a 4.5 star Amazon rating and spent most of 2012 ranked #1 in its Amazon category.

Marion has since written four more novels set in the same world (Bite Me: Big Easy Nights, Villains Inc., Young Sentinels, and Small Town Heroes), astonished each time at the enthusiastic response of his readers. He is currently working hard on a sixth book, this one also featuring Astra and company, while polishing the plot of his deeply unserious space epic, Worst Contact. Really.