Today is my stop during the blog tour for The Better Man by Amy Vastine. I review this book and there’s a tour wide giveaway! You can view the whole tour schedule here. 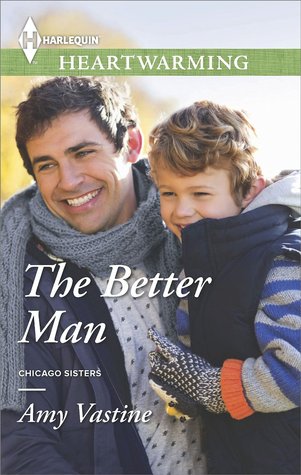 As soon as I heard of the tour for The Better Man and noticed it was written by Amy Vastine I immediately signed-up. I really enjoyed Amy her first book Th Weather Girl and I was excited to have the chance to read this one as well.

The Better Man is an emotionally charged story about two people who had a hard live and still go through a lot. There where happy and sad moment and it could be hard to see them struggle sometimes, but when they finally get their good and hopeful moments, it was beautiful to see. This book had me hooked from the start and I really enjoyed the story. I was right there beside the characters following their ups and down and wondering if things ever would get right for everyone.

I really liked all the characters in this book. Kendall was trying so hard to be the best mother she could be for her son Simon, while also still carrying around some problems of her own. Her sons SImon has selective mutism and it was so sad to see sometimes how hard life must be for this boy. Simon was such a great kid when he did speak and he added a lof ot fun to the book as well. I especially liked his interactions with Max and how he kept asking questions. Max is a great main character, he made mistakes in the past, but he’s doing everything he can to do better now. It isn’t easy, but I liked seeing him change during this book and towards the end he makes such a good decisions and I liked him even more. The side characters are interesting as well, it seems like they all have their own story and I have the feeling Kendall her sister’s might get their own book, that’s how much depth there was behind them. The side characters all had their own motives and personalities and made the whole story feel much more real, they filled the pages and I liked reading about them all.

While this book has been categorized as a romance I felt like the romance took a back-seat to everything else going on. I felt like it fitted the story, but it just felt a bit weird to go in expecting a romance novel, the romance felt like a side plot to me, it’s not the main focus. In my opinion the story and the characters are the focus of this book. That said I did like the romance, but I wished there was a little more depth, There aren’t many scenes where Kendall and Max where together and while I certainly thought there was something between them, once their relationship started I just didn’t feel their love. They where good friends and the potential was there, but the romance just didn’t convince and I think I would’ve liked it more if the romance had more time to develop.

To conclude: I really enjoyed this story, it had some really sad and some really happy moments. The characters where what made this book shine, they all had a past, personality and motives, even the side characters. This book has a fun and quirky cast of characters and I enjoyed seeing them interact with each other. I felt the romance took a bit of a back-seat to everything else going on and when there was romance I didn’t really feel it and wished it would have taken them a bit longer to get there. All in all a great book and I am looking forward to reading what Amy writes next!

You can add this book to your to-read list on Goodreads.

Other books I read and reviewed by this author:
– Amy Vastine – The Weather Girl – 4 stars 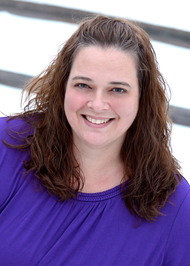 About the author:
Amy Vastine has been plotting stories in her head for as long as she can remember. An eternal optimist, she studied social work, hoping to teach others how to find their silver lining. Now, she enjoys creating happily ever afters for all to read.