I am so excited to be part of the blog tour for Switch a dystopia book written by Janelle Stalder. It’s the first book in the New World series! I will share my review with you today and some information about the book and the author. And there is a giveaway to win an e-copy of Switch! 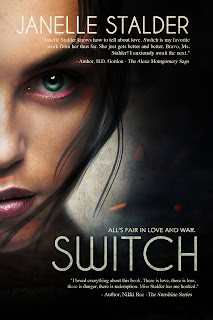 Two thirds of the world’s population has been wiped out, devastated by the worst war earth has ever seen. Still standing amongst the ruins is a mind reader who finds herself on the wrong side of the war. Everyone does what they must to survive. When the rebels bent on bringing down the New World leader start to rise up, it is her job to make sure they stay down where they belong. That is, until one rebel sneaks past her defences and into her heart. Love will blossom from the ashes, but will it be enough to save them, or will it mean the end of them both?

*This book is for mature audiences due to sexual situations, violence and strong language. NA

I love Janelle her Eden series and when I heard she was writing a dystopia book I was realy curious and excited, but for me Switch didn’t live up to my expectations. I did like reading it for the most part, Janelle her writing style is really good and overall the pace of the book was good.

The story starts off with a prologue, which was really interesting and captured my attention. I liked how the story began and it’s written in multiple point of views, which I love. I do think the multiple point of views could’ve been used better in this book. In the Eden series the multiple point of views show us 2 sides of a war and I was able to like both of them and want both sides to win. In Switch we see sort of two sides of a war and honestly I didn’t really connect or care about either side. There isn’t enough backstory and planning and everything else that makes a good dystopia book for me. Also parts of this book read more like an NA contemporary romance book, which isn’t bad, but I expected a dystopia book and I felt like the focus is more on the romance than on world building.

While I really liked Dinah when she was first introduced I had the feeling she changed a bit too quickly. Also I would’ve liked getting to know more about her place and role in the New World army and her thoughts about it. Bridgette is another character I liked, but sadly there aren’t that much chapters from her point of view, the focus wasn’t on her story, although I do have the feeling she will be playing a bigger part in the next book. Pete was a character I couldn’t really connect with, I didn’t feel like I really knew him and his ideas and ideals. I also didn’t understand why Dinah was so different for him from other girls. We don’t learn a lot about the side characters, this book mostly focusses on Dinah and Pete and I didn’t feel like I really got to know the characters. I kept confusing some of the side characters with each other.

There is a lot of romance in this book. It felt a bit like a contemporary romance book at times and maybe I would’ve liked this book better if it was. While I liked Dinah, as soon as she met Pete she seemed to change a lot. I couldn’t really feel their romance and while I understood they felt something for each other, I just didn’t feel it. I also thought their relationship developed a bit too fast, I had the feeling they didn’t really spend time to get to know each other. Maybe that’s logical considering the world in which they live, but it still felt a bit off to me. Also they are supposed to be enemies, but as soon as they meet each other they seem to forget this. If this would’ve happened gradually I would understand, but it seemed to happen immediately when they first met. There is another romances at which is hinted in this book, but there isn’t much development for that in this book, again I have the feeling that romance wil be more important in the next book. The twist at the end makes me curious about what will happen in the next book and made me realize why this title is choosen.

I love world building in books and while some genres usually have more or less world building, dystopia is one of those genres in which I expect a lot of world building. And I am sad to say that Switch lacked world building. Even most of my basic questions about how the world is now and why the world is that way weren’t explained. This is this dystopia world, but it doesn’t come alive. Apparently there is a evil guy who reigns now, but what are his motivations and what is he working on now, what are the rebels doing and why, what is happening in the other countries, why aren’t these countries gettin involved with europe, are there rebels in the other countries and why is London called New Berlin? There are so many unanshwered questions and I was really disapointed there was so little world building, this book started out good with some world building, but that piece at the beginning is almost the only piece we get. I just couldn’t understand how this world was created and why two thirds of the people were dead. I did like the fact that Switch takes place in Europa, as most dystopia books takes place in America.

To conclude: I enjoyed this book, but there where also some parts I didn’t like. The writing style was good and I liked the overal story and pace. I did feel like there was too much focus on the romance and too less on the world building. I couldn’t really feel the romance and while I liked some characters I felt like I didn’t get to really know most of them. There is way too less world building in this book, this dystopia world didn’t come alive and at the end I have almost as much questions as I had at the beginning. Interesting story, but it didn’t really work for me. I expect a lot of world building in dystopia book and this book doesn’t have that.

You can add Switch to your to-read list on Goodreads

And here is that giveaway I mentioned. Go enter to win for a chance to win a copy of this book!