This is my stop during the blog tour for On by K.V. Flynn. This blog tour is organized by Lola’s Blog Tours. The blog tour runs from 1 till 14 October, you can view the complete tour schedule here. And K.V> Flynn shares her top ten fods with us today! 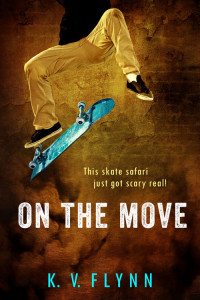 Blurb:
Callum Vicente and his four best middle school buddies live in a Southern California beach town, and narrowly miss being grounded for life after they sneak out of town on the bus for a great skateboard day just before promotion from 8th grade. Their pal Justice ends up with a wicked broken leg, but their parents soon forget about it because weird, tense things are happening in the news. So Callum, Levi and his bff Apollo are soon deep into their best summer ever at PEAK skateboard camp where they learn tricks from the pros, grind on endless street courses, and careen off one awesome ramp straight into the lake. It is mad fun until the War breaks out: the teens watch major cities blown up on TV, have no idea what’s happened to their parents, and then lose virtually all communication with the outside world.

Stranded, the boarder buddies strike out on their own to find their families, travelling north through all of California and Oregon, following a network of underground message boards and savvy riders who they find holed up in skate parks along the way. They pick up their school buddy Mateo Beltran and hitch a ride with their Native friend Obbie, on his way to safety on his dad’s reservation in Washington state, and even get some surprising help as they try to figure out a world gone crazy while they are On the Move.

You can find On the Move on Goodreads

Top Ten list Food
K.V. Flynn from On The Move here, to tell you about our favorite foods and snacks.
Wait—aren’t those the same thing, basically?

I’m thinking about food from a 14-year-old skater’s point of view, and they love sweet, refreshing snacks. No question! But they’re also very Southern California, so some of these kids’ tastes might surprise you.

1. When the candy craving comes up, it’s a toss-up between Nestlé’s Bunch-a-crunch and KitKats OR going the Sour Patch Straws/Gummy Worms direction.
2. Thirsty? Well, on the move, during hot beach days, definitely Iced Caramel Machiatto… Yeah, we’re Starbucks fans!
3. But we also love a good juicy lemonade. And, since we were little, we regularly go for great fresh fruit smoothies. Banana-strawberry. Mango-pineapple. Yum!
4. Chips—Dorito’s ranch-flavored. Plus definitely salt ’n’ vinegar potato chips. Or those new spicy sweet chili nachos—ooo, those can really hit the spot.
5. We have tons of really great Mexican food around—especially if someone like Mrs. Beltran is making it for you: like her famous rice and chile rellenos at Christmas time. But I can go for a bean and cheese burrito on a regular basis, or a quesadilla with guacamole. And a hot sugary churro dipped in chocolate is a truly awesome treat.
6. Life is not all snacks—I know! We love regular food that our moms make. For me, pesto pasta is a big favorite. And fresh paninis, like in On the Move, with grilled onions and green peppers on fresh bread with melty hot provolone and cheddar cheese.
7. We grew up eating lots of fresh salads, which is different from kids in other places, I know. So most every day I want a big bowl of baby greens, avocado, little sugar plum tomatoes, cucumber and my favorite dressing—olive oil, Dijon mustard, a splash of balsamic, cumin powder, salt and pepper. A Caesar salad with parmesan and homemade garlic-salt croutons also rocks.
8. I love ice cream. Different times, different flavors. I always have a Ben ‘n’ Jerry’s ice cream cake for my birthday, usually with at least Cookie’s ‘n’ cream in one layer. Sometimes solid chocolate fudge. Sometimes I’m just in the mood for vanilla!
9. After middle school, every kid is soooo hungry, so before studying and homework, I love a bowl of soup—creamy tomato with basil, or a chunky minestrone. More croutons, please! Or, garlic bread goes excellent. And a salad. Maybe a pomegranate or crisp green grapes for dessert!
10. Popular beach towns like Surfside usually have some rockin’ pizza, and who doesn’t love that once in a while? We have one called d’Amores that you can get by the slice—my favorite is white with ricotta and spinach. I think they make it with water from Boston or some crazy thing—whatever, it is thin and delicious. We also have a new place in our area called 800 Degrees where you build your own pizza from a pile of yummy things like 5 different cheeses, artichokes, sun-dried tomatoes, and then they throw it in such a hot oven that the crust is bubbled and crispy by the time you get down the line to the cash register!

So that’s the top food list from me!
I know you know this, but On the Move is set in Southern California, and is about a 14-year-old skater named Callum Vicente. He and his middle school skateboard buddies are spending the best summer together ever, grinding and doing tricks all day at a mountain-top skate camp called PEAK. But when a major war breaks out, they’re stranded—separated from their parents, cut off from communications, and almost alone in an evacuated state. They use their wits and resources, along with a secret network of skate parks and message boards, to travel miles to the north and reach their families in the Safe Camps—skating all the way!
The book is for and about boys age 10-15, and really lives inside the world of skateboarding and boys’ friendships. It’s about a totally multi-cultural group of buddies, and they all love these kinds of food! Obbie is Native American, Mateo’s Mexican, their camp friend Martin is African-American, and narrator Callum is half Spanish. The story follows the kids through the experience of a huge War in the United States, which is scary and demanding. But they do discover a cool underground network of retro tech, green living, secret clues, along with skater support like no other you’ve read about before.
I hope that you and your readers will check it out, Lola. Or get it for a kid who’s looking for a great book!

Note about the book from the author:
This is older MG/young YA, targeted at 10-15-year-olds. It’s action adventure with boys as the main story focus—I think that there are never enough books for and about boys in this reading level. ON THE MOVE really lives inside the world of skateboarding and boys’ friendships. Also, this is about a totally multi-cultural group of buddies: Obbie is Native American, Mateo’s Mexican, their camp friend Martin is African-American, and narrator Callum is half Spanish. And, because these guys experience a huge War, they also pick up on a cool underground network of retro tech, green living, secret clues, and skater support like no other you’ve read about before.
Like all the great teen adventures—think Maximum Ride, Pendragon, Ender’s Game, Demonata and Cirque du Freak—the boys in this book are strong, smart, funny, resourceful, and tight. Also, unlike many YA books, the boys experience a very real, world-changing event that challenges what they know and where they’ll go. But their skills, their brains, and their love of skateboarding guide them through the chaos and complications—plus, most of the time, they have a blast doing it!

About the Author:
K.V. Flynn is a writer who lives in Southern California, kind of near Manhattan-Huntington-Malibu Beach. His action-adventure book ON THE MOVE about 14-year-old skater friends who are stranded at skate camp when a War breaks out, comes out on Sept.2. Follow the news about it at www.OnTheMoveBooks.com. His favorite ride is an 8.25″ Krooked deck, Independent trucks, and 53 mm Spitfire wheels. He is half Spanish and half Irish. K.V. has a dog, and has been watching “Pretty Sweet” by Chocolate Skateboards, “Stay Gold” by Emerica, and “The Deathwish Video” by Deathwish Skateboards. What about you!? He and his bros regularly cruise Venice, Stoner, Skatelab, and Van’s. Talk back: KVFlynnOntheMove@gmail.com. 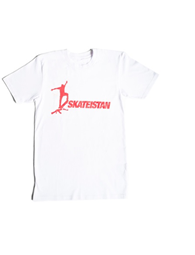