Today I am part of the blog tour of Goal! by Bellamy Black. I share with you the information about the book, the excerpt and there is a tour wide giveaway. 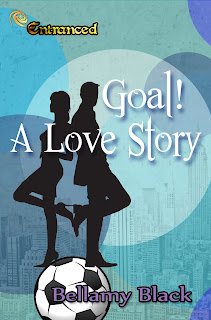 Blurb:
Jenny Wales is a local television star who has everything she needs: good friends, a great career, and a gorgeous apartment with an outstanding shower. The only thing missing in her life is love, something that she hasn’t made time for in her quest to be the best reporter in town.

An international soccer star, Paolo Gutierrez is a reluctant celebrity looking for a quieter life away from the glitz and glamour of Europe. He longs for chance to remember the game he loves and build a life for himself far from the paparazzi’s lens.

When Jenny and Paolo meet, it’s love at first sight. It should be a simple story of boy meets girl, but the team, the town, and the entire world seem to have an opinion on their love affair. Up against a losing streak, Victoria Beckham wannabes, and the risk of losing their careers, Jenny and Paolo will have to fight to win this game of love.

You can add Goal! to your to-read list on Goodreads

About the Author:
Bellamy Black has enjoyed the written word long before she could actually read it. This initially one-sided relationship has blossomed into a lifelong love affair filled with adventurous governesses, brave women, and determined warriors. An East Coast girl, living an East Coast life, when she is not writing or working her corporate day job, Bellamy enjoys spending time with friends, a nice glass of Shiraz, and the occasional bit of mayhem.
She will also never turn down an opportunity to catch a rerun of the Golden Girls.

Excerpt :
Jenny’s lips fall open as she stares at the man formerly known as Paolo. “I,” she says with some disgust, “am the worst reporter ever.”
Paolo reaches out, places a gentle finger under her chin, and shuts her mouth. “You are not the worst reporter,” he says softly, willing his cheeks to not turn red. He grimaces at her expression;, she looks so dismayed, adorable but dismayed. “I am just good at evading reporters.” He shrugs helplessly, giving her what he hopes is an apologetic yet winning smile. “I’ve had to be.” It does not seem to be working. “I’ve had a lot of experience over the years.” Paolo tries not to shrink back as her expressions changes from dismay to fury.
“Well.” She leans toward him with an angry light in her eye. “I’m sure you’ve had a lot experience with that — fifteen years, I believe.” She hisses through her teeth, “Juan Carlos ‘the Assassin’ Gutierrez.”
Paolo gazes at her in awe, mesmerized by the fire in her eyes. She is really something. Gorgeous. He draws back as she squints at him. And a little terrifying. I like it. “Actually.” He chuckles weakly. “It is Juan Carlos Paolo Gutierrez. The Spanish press like to drop the Paolo and replace it with Assassin. It drives my mother crazy.” He chuckles again. “And you pronounced it excellently.”
“Well, thanks,” she snaps, folding her arms. “I got tips from an expert.” Her knee bounces in agitation. “Right now, I don’t know if I’m more aggravated with you…” Her angry gaze flies around the room, landing on the leader of the Conga. “Or with that wooly mammoth over there who has been masquerading as my best friend.” Jenny’s eyes narrow to slits.
Across the room, Rocky stumbles, nearly falling into one of the men he’d told Paolo were called the Wonder Twins.
“Prepare for extinction.” Jenny starts to rise.
“Wait.” Paolo places a hand on her knee, not wanting her to leave. “I am sorry for misleading you. It was my fault.” He confesses, “He had no choice. Please don’t be upset with Rocky.”
“He had no choice? Rocky?” She seems dubious but she slumps back onto the sofa, her eyes flitting between the hand on her knee and his eyes. Paolo smiles at her gently and her eyes narrow again but she makes no attempt to remove his hand. “What was it — the Guy Code?”
“No.” He scoffs. “Nothing as silly as that.” Paolo sighs, squeezing her knee almost absentmindedly as he gathers his thoughts, trying to find the best way to explain his friendship with Rocky. He squeezes again and Jenny lets out a little giggle. Paolo pretends not to hear her as he turns his eyes to her and holds her gaze, wanting her to see his sincerity and honest regret. “It was a handshake and a spit oath.”

And I did an interview with Bellamy Black

First some questions about your book Goal!:
– How did you come up with the idea for Goal?
I was inspired by the 2010 World Cup and a viral video that was making the rounds on the internet. Without giving too much away, there may be no athlete in the world as passionate as a soccer player!

– Where does Goal take place (country/city) and why did you choose that location?
Oklahoma City, Oklahoma. I like the idea of a place that has both a small town and big city vibe.

– Are there scenes that you enjoy writing more than other?
Definitely the funny ones!

– Which scenes do you find the most difficult to write?
Love scenes! I’m always wondering about body placement and angles, technical stuff. I am not above whipping out art doll mannequins in order to get it right!

A few questions about writing:
– What do you enjoy most about being a writer?
I know many writers have probably said this but I like letting the voices in my head out. I like putting the things I see and feel in my minds eyes in words.

– What is the most difficult part of being a writer?
Putting the things I see and feel in my minds eyes in words. Ha! I reread and rewrite and am always searching for the right word that isn’t always there.

– Do you have any writing habits? Like writing early in the morning or late in the evening?
I like to write non-linearly, I call it quilting. If I see a scene in my head, I write it down, even if it is not necessarily the next scene in my outline. Then, when I sit down for my writing sessions I stitch the scenes together and add more as I go. It helps keep me from getting too stuck.

– Why did you decide to write a contemporary romance book? What attracts you to this genre?
It’s interesting because I probably like to read historical romances but I write contemporary stories.  I like the freeness of now, if that makes sense. I’m also a serious researcher, so if I ever wrote a historical, I would probably get lost in a library and never get a word down.

A few questions about you:
– What is your favorite genre of books to read?
Oh, it would be probably easier to list the kind I don’t like! I love gothics, victorians, contemporaries, mysteries, science-fiction…If it has an interesting plot I’ll read it! Although Jane Eyre will forever own my heart.

– What do you like to do in your spare time?
I love to be outdoors and write. Not necessarily outdoors, of course.

– What is your favorite food?
I’ll try anything almost once but I will never say no to a fish taco.

– What is your favorite drink?
Mojito any time of year!

– In Goal, the love interest plays soccer. Do you play any sports yourself?
I play a mean game of kickball and that is about it. I’m much more of a fan than an athlete!

Thanks Bellamy for answering my questions!
Thank you Lola!

And there is a tour wide giveaway! So go enter for a chance to win an e-copy of Goal!
a Rafflecopter giveaway