Today is my stop during the Finding Home blog tour! I will share my review with you and then an interview I did with the author. And there is a tour wide giveaway! 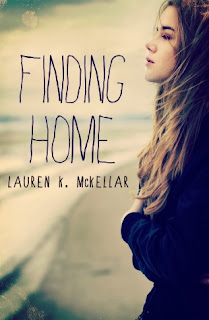 Blurb: Moody, atmospheric, and just a little bit punk, Finding Home takes contemporary YA to a new level of grit…

When Amy’s mum dies, the last thing she expects is to be kicked off her dad’s music tour all the way to her Aunt Lou in a depressing hole of a seaside town. But it’s okay — Amy learned how to cope with the best, and soon finds a hard-drinking, party-loving crowd to help ease the pain.

The only solace is her music class, but even there she can’t seem to keep it together, sabotaging her grade and her one chance at a meaningful relationship. It takes a hard truth from her only friend before Amy realises that she has to come to terms with her past, before she destroys her future.

I read Finding Home in one sitting, which is realy uncommon these days. I really enjoyed Finding Home, it is the story of s truggling teenager looking for a place to belong and having someone care about her and she makes quite her share of really stupid chooses on the way, but at the end she grows stronger.

Finding Home had that keep-reading-feel, the beginning felt a bit slow, but after that it really picked up pace. There where some flashbacks, but it was really nicely done with italics so it was obvious which where the flashbacks and these flashbacks gave some insight in her past without disrupting the pace of the story.

I wasn’t sure whether I liked Amy or not at the beginning, I certainly felt bad for her how she got dumped at her aunt’s in a new town. Amy also made her fair of bad choiches and mistakes, but at the end she makes some great descisions too and I liked her at the end. Finding Home reminds me of my own troubled teenage years and all the drama and insecurities at that age. I really wanted to warn Amy a few times, because for the reader it was obvious that something was going wrong.

I liked the beach setting, although it didn’t play such a big part as I hoped. Also after reading this I believe even more that the cover really fits the story. Finding Home was enjoyable, but I woukd’ve liked seeing some more of Amy her interactions with for example her aunt, also I had some difficulties getting a good idea of the side characters and I kept forgetting how each of them looked like. The story really focusses on Amy and her problems. I really liked the ending and while it wrapped up things nicely, I still would’ve liked reading what happened next.

To conclude: I really enjoyed Finding Home, I read it one sitting, because I just wanted to read what would happen next. Amy is a troubled teen who makes her fair share of mistakes. I did like her at the end and the ending wrapped things up nicely, but I still would’ve liked reading what happened next.

Interview with Lauren McKellar for the Finding Home blog tour

Hi Lauren! Welcome to Lola’s Reviews!
Thanks for having me, excited to be here.

How did you come up with the idea for Finding Home?
I’d never written YA before, but I saw a competition online promoting a YA novel-writing competition, so I decided to give it a shot.
To my surprise, it was like I’d found my writing flair. I’d always written adult chick lit before, but as soon as I changed my mindset and went for a younger age group, the words came so much more easily.
I really wanted to write something about the sort of issues teenagers face: sex, alcohol and drugs, and I feel like not enough books addressed those. And so, Finding Home was born.

Where does the story take place and what is the impact of the location on the story?
The story takes place in a small seaside town on the coast of Australia. The location plays a big part; before the story commences, Amy, has been home-schooled, travelling and living in capital cities with her father, who is a famous pop star.
Themes include relocation, adjusting to a new locale and also the reflection that, sometimes, small towns can be just as wild as big ones. Sometimes…

Can you tell us a bit about Amy and how you came up with the idea for her character?
Amy is a troubled seventeen-year-old girl who has had a rough lot in life; her mother always pushed her to be this outgoing, sort of sexual person, which she naturally isn’t, and then, one day, her mother passes away from a drug overdose. Amy deals with this by drinking heavily, and that’s where the story starts.
Amy was devised out of a few different characters I’d had floating around for a while, but I think the biggest thing I did with Amy was give her flaws. At times, she’s not very likeable, which is a risky attribute to impart upon on a character, but I hope people can stick with her and see her become a better person at the end of it all.

The blurb mentions that Amy her only solace is music class. What role does music play in this story?
Amy finds terror and solace in music. On the one hand, she’s so afraid what it represents, which to her is abandonment and neglect. On the other hand, it’s one of the only things she can trust, that she is truly is good at. Amy can lose herself in music, and it’s there she learns to realign her values.
I guess you could say music is the moral compass. It represents both good and evil, which end up not so far apart, in the end.

Are there scenes you enjoy writing more than others?
At the moment, I really like writing flirting scenes. Girl meets boy interaction is really doing it for me, at the moment!
When I wrote Finding Home, though, I enjoyed the flashbacks. These tended to be the most dramatic pieces in the book, and I think that’s what drew me to them.

Which scenes do you find most difficult to write?
All of them. Seriously. Because it was my debut novel, I did so much rewriting and editing…it felt like I was learning how to write again. But I’m really glad I stuck with it.

Finding Home is your debut novel, can you tell us a bit about what you are writing now?
I have just finished my second novel, The Problem With Crazy, coming out in 2014. It’s an upper YA/NA story about Huntington’s Disease, a serious mental illness that can tear apart a family. I’m really excited about raising awareness for this horrible disease, and hope I can make some sort of a difference.

Do you have any writing habits? Or a favourite drink/food to have when you write?
I used to only write when I was in perfect quiet conditions, but now I write whenever I can, wherever I can.
I write with coffee, wine, snacks – pretty much anything! I do find I work better on a reward-based system, though. If I set myself a target of ‘Write X,000 words and you can have X’, I’m so much more motivated.

What do you like to do in your spare time?
Spare time? I am unfamiliar with this concept.
Seriously, I work a full-time job, I’m a freelance editor, and I also am Marketing Director and Senior Editor at Entranced Publishing. If I do manage to get free time, I love to catch up with friends over a meal; I adore going for walks on the beach with my two super cute puppies; and, on rare occasions, I love to snuggle up with a good book and a glass of wine. Best ever…

Thanks so much for answering my questions Lauren!
Thanks for having me, I really appreciate it!

About the author:
Lauren McKellar is a writer and reader of Young and New Adult books. Her debut novel Finding Home is out now, and can be bought from all your usual eBook sites. She also works as a freelance editor for novels for all age groups and you can chat to her on twitter or facebook any time you’d like. Website

Win one of two $5 Amazon cards, one $10 Amazon card or a copy of Finding Home.