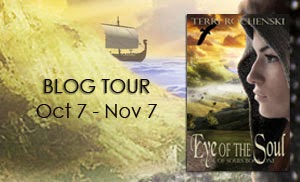 Today I am kicking off the blog tour for Eye of the Soul (Pool of Souls #1) by Terri Rochenski! I am going to tell you a bit about this book, share a tens list about food from the author with you, there is an excerpt and a tour wide giveaway! 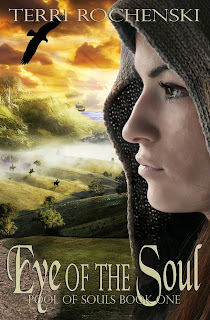 That should be Hyla’s first thought as her people are chained and imprisoned for no imaginable reason.

Instead, Hyla finds herself traveling through a land void of Natives, with human soldiers pillaging in desperate pursuit of her, and in search of the mystical Pool of Souls—home to the one man who can save her people.

Or so she believes.

Led by her faith in the deity Fadir, Hyla is met along her journey by Jadon—a human male and fierce King’s warrior, and his childhood best friend Conlin—one of the few Natives aware of his Fadir-given Talents.

Protected by Jadon, guided by Conlin, and with an unfailing belief in the purpose of her pilgrimage, Hyla carries on.

Like her, though, another searches for the Pool, and should he gain access first, everyone she loves, and everything she knows, could be lost.

You can buy Eye of the Soul here:
– Amazon paperback
– Amazon
– B&N
– Kobo

Cursing her arthritic fingers, Miri squeezed out a rag and draped it over the human man’s hot forehead.
“I’ve seen a lot more harvests than you, old goat,” she muttered, lifting his eyelids. “I’m thinking you’ll never catch up either. Doubt you last another half-moon’s phase.”
Miri pushed to her feet and stretched her hunched back. A heavy sigh slipped past her wrinkled lips as she glanced around the sick house. Keeping the night watch wasn’t too bad—she’d volunteered often since her old bones wouldn’t allow much sleep.
“Joints wasted, hearing all but gone …” Miri yanked on the long white braid lying over her shoulder. “I’m the old goat.”
She shuffled down the aisle, woolen kirtle swishing in the silence. A cool, autumn breeze rustled the crimson leaves of the magnolia and palm fronds overhead, drawing her gaze upward. Violet streaks lit the pre-dawn sky.A dog barked, yipped, and fell silent.
Miri peered across the village green to the thatched buildings beyond. A shadow passed between two cottages. Another three hurried toward the neighboring dwelling.
“Sight fading or my mind, too?” Miri rubbed her watery eyes, blinked, and leaned forward. Light flickered through the palm trees behind the outlying homes.
Torches?
The flames drew closer, weaving between the trunks.
Humans from the mainland? Miri’s hand clutched at her throat. Soldiers. Fadir have mercy.
The men crept through the village, taking up positions at every doorway. Two brutes, more horse-like in size than human, approached the sick house.
Sputtering torch held high, the first strode forward, dark eyes intent upon Miri. A green surcoat covered broad shoulders and fell to his thighs. The golden wheat sheaf of the city of Varosh adorned his chest.
Cold sweat beaded upon Miri’s brow. Breath burst from her lungs, and she moved back, clutching the door jam.
The second soldier stepped closer, chains and shackles clanking in his hand. He stopped two paces away from Miri, and a smile stretched his stubbled cheeks, revealing rotted teeth. “Good morning pointy-ears.”
Miri stared, heartbeat thundering in her ears. She’d been called worse in her eighty-three birth passings but never with such malice.
A single cry rang out across the village, and doors crashed inward. Screams rent the air.
“Don’t fight Native woman,” rotten-teeth sneered, shackles outstretched.
“W-why?” Miri whispered, taking a step backward.
A scowl narrowed his gaze, and his fist shot forward.
Bursts of light and pain exploded through Miri as she crumpled to the floor.
#
Miri’s people huddled on the village green as fall’s pale sun crested the trees. Cold metal had been clasped around their necks and ankles. Many trembled in the cool air, little more than night clothes covering their nakedness. Miri held to her braid with a white-knuckled grip, her head and its egg-sized bump throbbing in time with her pulse.
A handful of other battered Natives who had attempted flight were the last to join them, the soldiers tossing them forward like sacks of potatoes.

For my stop during the tour Terri wrote a tens list about her ten favourite foods.

Top Ten Favorite Foods
What a fun topic!! ESPECIALLY for a prego woman who loves food. ‘Course, by the time this post goes live, I’ll have a newborn in my arms instead of making me crave all kinds of strange stuff.
Anyhoo.
Here’s this prego woman’s current favorite foods in no particular order.
1. Cherry Moose Tracks ice cream. We found this little hole-in-the-wall dairy bar up the street from our house. The first time there I saw this flavor on their list and asked about it since I’m a huge Moose Tracks fan. CHERRY is cherry ice cream. Fudge swirls. Chocolate covered cherry bits.
o_O Seriously.
Oh yes. New fav. I ate all three scoops and wanted more.
2. Dairy Queen’s Snickers blizzard. ‘Nuff said.
3. Pepperoni pizza.
4. Italian hoagies / subs / grinders whatever you all call them. They’re hoagies in central Pennsylvania.

Yes, prego women shouldn’t have deli meats loaded with nitrates, but YUM – IF they’re made right. Capicolla, Italian Ham, Hard Salami, Provolone, hots or banana peppers, O&V.
*drool*
5. My mother’s spaghetti sauce. DELISH!
6. Panera Bread’s Greek dressing and their broccoli cheddar soup.
7. Medium-rare steak with a side order of buttered button mushrooms.
8. Candied sweet potatoes.
9. Salt and vinegar chips, pretty much any brand.
10. Asiago cheese and olives. ‘Course, they’re better with Red Cat from Hazlitt Winery, but I really shouldn’t have that right now.  😉
I could go on & on & on, but these ten are just what I’d like to devour. Right. Now. 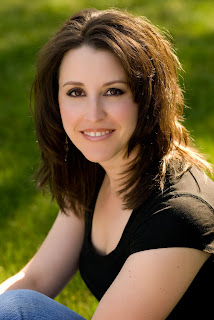 Terri started writing stories in the 8th grade, when a little gnome whispered in her brain. Gundi’s Great Adventure never hit the best seller list, but it started a long love affair with the fantasy genre.

Today she enjoys an escape to Middle Earth during the rare ‘me’ moments her two young daughters allow. When not potty training or kissing boo-boos, she can be found on her back patio in the boondocks of New Hampshire, book or pencil in hand.

2 responses to “Blog Tour: Eye of the Soul (Pool of Souls #1) by Terri Rochenski”