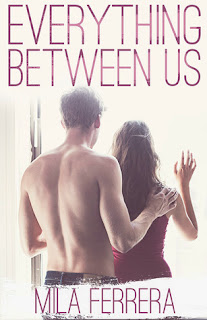 Everything Between Us
by Mila Ferrera

Blurb:
Daniel’s got everything figured out. He makes a good living as an artist … mostly through offering “private shows” to the wives of local wealthy businessmen. He never stops playing the game and never lets anyone touch his heart. But when his current fling offers him a few hundred an hour for art lessons for her reclusive, college-dropout daughter, Daniel finds himself forgetting his own rules. The girl is rude. Insulting. Incredible.
And she sees straight through him.

Stella is hiding from the world, not because she wants to, but because crippling panic attacks await her every time she tries to live a normal life. She’s determined to push everyone–including her handsome new art teacher—away. But Daniel makes it utterly impossible. The guy is irritating. Mocking. Magnetic.

And makes her want things she knows she can never have.

What starts as a battle of wills turns into passion, where giving in means facing the things that scare them most.

I have some mixed feelings about this book, there where parts I really liked, but also some parts that I didn’t like and even some parts that where so disgusting it ruined part of the book for me. But I wanted to keep reading and in the end I did enjoy this book.

Let me start with the disgusting part, Daniel sleeps with older women for money and I think that’s disgusting and then when he falls in love with the daughter of his current fuck body it’s just weird. I just couldn’t wrap my mind around the fact that he did this for money and wondered if there really wasn’t another option to get money that wa sbetter than this. After the initial scene with grossed me out it started like a normal romance book. Daniel is teaching Stella art lessons and her om hopes this will help Stella who has Argoraphobia, which means she get’s panic attacks when she’s outside the house.

I liked how the story progressed although I thought it was a bit weird that Stella her phobie is such a big part of the story and at other points seems not to play such a big part at all. So she has this fear, but certainly in the first part we don’t really see her struggle with it, she says she trying, but we don’t read about this and I thought this was a bit weird. I wanted to see her trying to get outside and then having a panic attack not just hear her say she’s trying while we don’t read about those efforts. I know struggling with a phobia is difficult, but I would’ve liked if we read more about it and her struggled, but we only get to read about that at the end of the book.

The story was a bit predictable at some parts and I think the plot of a man-whore falling in love with an innocent girl is just a bit overdone. I have read so many books with this theme already and I think I just have read too many of those books. Also there is a certain scene later on in the book, where I couldn’t believe Stella actually said/did a certain thing and it made someonething more ugly than it should be. It just felt off and it ruined some scènes for me, because it just felt wrong how it happened.

I didn’t like Daniel at all at first, it was just so difficult to get over his disgusting behavior, especially because I didn’t buy the explanation. Really you don’t do things like that just because you’re good at it. I am sure he is good at other things too. So I had some difficulties connecting with Daniel at first. I did like how he was hiding himself and only gradually learned to be himself. I wasn’t sure what to think of Stella at first, but at the story continued I started to like her more. I liked the fact that she liked to bake and that she had to muster the courage to choose what she really wanted to instead of what her parents wanted for her. Also in the last 70 or so pages she really shows some strenght and does some brave things. Let’s say I liked the last 70 pages the best.

To conclude: I liked this book, but I had some problems with a concept that I found disgusting and distrubing andf this ruined the book a bit for me. The story has some great scenes, but also some I didn’t like. I had some trouble connecting with the characters at first, but I started to like them more as the story goes on.

You can buy Everything Between Us here:
– Amazon 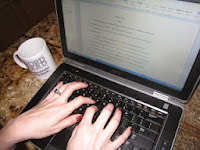 About the author:
Mila Ferrera lives in New England, where she has a family and a job and does various normal, everyday things, all while plotting novels in her head. She has a passion for writing new adult/adult romance featuring psychological twists and tortured heroes. Her own psychology internship involved plenty of consultation, but alas, no sexy Swedish doctors, and her decision to make one up is what sparked her self-publishing adventures. She’s the author of SPIRAL (available now), ONLY BETWEEN US (9/3/13), and EVERYTHING BETWEEN US (11/5/13).

And there is a giveaway to win an e-copy of Everything Between Us! You can enter the rafflecopter here:

One response to “Blog Tour: Everything Between Us by Mila Ferrera”