Today is my stop during the blog tour for Entrusted by Connie Ann Michael. I share an excerpt of the bok with you and there is an awesome tour wide giveaway! 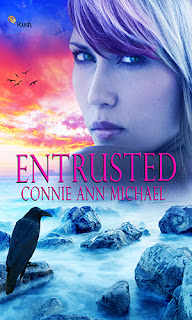 Excerpt:
He pulled me to my feet. His hands remained on my upper arms. The intense heat of our connection radiated through the sheer material of my blouse. “It doesn’t mean I have to like the fact I’ve been replaced.” His voice was rough. “You look beautiful.”
I cocked my head to the side and watched his eyes move over me. A shiver ran through me. “You weren’t replaced.”
“You’re cold.” He took off his coat and wrapped it around my shoulders. Immediately, his scent filled the air around me. My head was swimming, either from the wine or the close proximity of Solomon, I wasn’t sure which. I held the front of the jacket closed. He slid his arms beneath, it running his hands up and down my back to warm me. Oh my goodness, was I getting warm.
“Warm now?” He gave me his teasing grin.
“Why were you at the window?” I tried to keep my voice even while his hands continued to caress my back. “You scared the crap out of me.”
“I was going to knock. But then I saw you and sort of lost my train of thought. Anyway, I didn’t want to have to play the social guy this evening.”
“I’m not sure she would have invited you, it is kind of a girl’s night,” I said.
“Why risk it?” There was that grin again.
I shook my head in a feeble attempt to avoid slamming my mouth against his lips. “So?” I raised my eyebrows.
“So?” He sounded distracted. He seemed to enjoy the closeness as much as I.
“Why are you here?” I pressed into his arms, utilizing all of my liquid courage. I would worry about Luke’s wrath later. Solomon couldn’t back away even if he wanted to and I was getting the feeling that he didn’t want to. His face clouded and I shifted my eyes to his mouth. I wanted to feel his lips on mine more than anything.
“You’ve been drinking.” His voice was tight.
I came crashing back to reality. “What?” I stepped back as if he had slapped me. Why was it no one ever kissed me? Was I that revolting?
“Better not let Bidi know you’re drinking while you’re working for her friend.” His disapproval was palpable.
“I wasn’t.” I started to lie, and then thought better of it. “It was just a glass.” It was a lame response, but I felt like a child being scolded. “Bidi isn’t my parent,” I added, and then wished I had kept my mouth shut.
He raised an eyebrow, but didn’t say a word. He’d dropped his hands from under the coat and the cold of the evening came back.
“And you’re not my father.” I took another step away from him.
“What would he have said about this?” I shivered at the coolness in his voice. I couldn’t believe he asked that.
“Nothing,” I yelled. “I don’t have one!”
He reached out and ran a finger along my forehead. “So many scars.” His hand continued down my cheek and stopped at my mouth. “Does it make it better? Does the alcohol make it any better?” The downward trail continued until he rested his palm lightly over my collarbone, his thumb running over my bare skin.
I felt my breath catch.
His hand slid to the back of my neck. Moving in, his lips touched my ear. “When it is time, you will not be drunk. Or tied to another.” 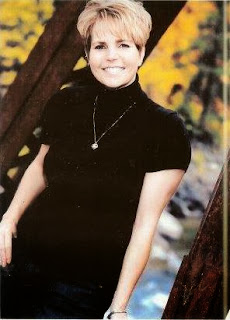 Connie Ann Michael was raised a city girl, but was converted to a country girl after college and now resides in a speck of a town in Central Washington State.  She is married to her former boss as she worked at the local Pizza place and has two college age boys that provide endless material for her books.  She loves the outdoors and can be found mountain biking, kayaking, or camping with her family.  Being a busy family, she can be found working on her newest novel while on long road trips.