Today I am part of the blog tour for Elsker by St Bende. And I have a quest post and an excerpt to share with you all. First a bit more about the book and my review :). 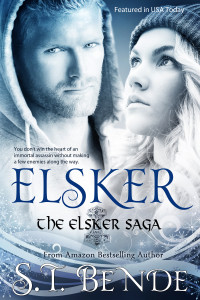 Blurb: Kristia Tostenson prefers Earl Grey to Grey Goose and book clubs to nightclubs, but when she transfers from her one-stoplight town to Cardiff University in Wales she falls in love with Ull Myhr. Her new boyfriend isn’t exactly what she was expecting. He’s an honest-to-goodness Norse God — an immortal assassin fated to die at Ragnarok, the battle destined to destroy Asgard and Earth. Kristia’s crazy visions are the only thing that can save their realms.
Her orderly life just got very messy.

My review:
I am so glad I got this book for review. After reading the prequel I couldn’t wait to start Elsker, the prequel gives the reader some extra information, which isn’t nessecary, but I liked having the background information. So I would certainly suggest picking up the prequel first.

This book start off when Kristia is still living in Oregon, US. I liked that we first got a sense of her past life and how she made the descision to go to Wales and study there. After that there is a time skip and the story goes on when she arrives in the UK. The beginning of the book really has a NA contemporary feel to it. Kristia goes to a university and meets her two awesome roommates. There are some hints to the mythology aspect, but the mythology doesn’t get really much attention until around halfway of the book. I did like getting to know Kristia and reading how she felt in love with Ull, before all the mythology started to surface.

The pace of the story was a bit slow at times, but there where also some fast paced parts. I wanted to keep reading and find out more about the characters and what was going to happen to them. There are some surprising twists and turns, especially towards the end of the story. The beginning is a bit predictable, but still very enjoyable.

The characters are really done well, I got a good sense of who they are and most characters have a few characteristics that make them feel like a real person, for example Veronica and her obsession with fashion. I really liked Kristia, she is a strong character and she can be very determined and stubborn sometimes. Her roommates are also great, they don’t play a huge part, but still there are a few great scenes with them and I liked how they were always ready to help Kristia. At first I didn’t really like Ull, I liked what I learned about him in the prequel, but at the start of this book he is being a complete jerk. Luckily that changes later on in the story. I also didn’t really feel the romance between Ull and Kristia at first, sometimes it felt like their relationship moved a bit too fast and on other points it moved really slow. Later on in the story I did start to feel the romance more, they are just perfect together and there is almost nothing they wouldn’t do for each other. Ull can be a bit too protective sometimes, but overall I did like him.

I always have a slight problem with mythology books, because I have so little knowledge of mythology I am always feeling like I am missing something. Luckily for me in this book there is quite some explantion about the myths, so at least I learned enough about the important parts. There isn’t that much world building in this book yet. Because the mythology only starts to play an important role later on in the story. The important things are explained, but not much more, I really hope we get to learn more about Asgard in the next book. I liked that this book focussed on Norse mythology instead of Greek, because so far most of the mythology books I have read are about Greek mythology. So reading about Norse mythology was a nice change.

To conclude: I really enjoyed this book.The characters are great and I liked that there was some explanation about the mythology in this book, so I didn’t feel like I was missing too much. At first I didn’t really feel the romance, but this changed later on in the story. Also the first half mainly focussed on student life and the mythology only starts to play a big part later on in the story. This book is a great begin of this series and I am looking forward to the next book already!

About the Author:
Before finding domestic bliss in suburbia, ST Bende lived in Manhattan Beach (became overly fond of Peet’s Coffee) and Europe… where she became overly fond of the musical Cats.  Her love of Scandinavian culture and a very patient Norwegian teacher inspired The Elsker Saga.  She hopes her characters make you smile and that one day pastries will be considered a health food.

Excerpt:
ELSKER – Book 1, THE ELSKER SAGA
At eight o’clock, a firm knock interrupted my reading.  I picked my way through the flower shop that our living room had become and opened the door.
“Oh good, you kept my peace offerings.”  Ull treated me to a rakish grin.
“Just a few of them,” I muttered.  “Come on in.”
“Oh, no.  You must come with me.”
“Why?”  I challenged.  Ull sighed.
“Are you going to fight me at every turn?”
“Probably.”
“Please come.”  He looked so adorable standing on my stoop, his scarf casually thrown across the grey sweater under his coat.  I gave in quicker than I meant to.
“Fine.”  I grabbed my coat from the closet by the door and shoved my keys and wallet into the pocket.  “Where are we off to?”  I closed the door behind me and followed Ull into the brisk night, waiting for his promised explanation.
But he didn’t say anything.  Instead, he put his hand on the small of my back and guided me away from campus.  I shivered and noticed that Ull wore his jacket open, at ease in the chill.  As we rounded the corner, Ull dropped his hand to clasp mine.  It was so warm, so strong, and for a moment I forgot to be mad at him.  We walked in silence as he led me down the main road.  After two right turns, I found myself standing in a quiet garden.
Ull had brought me to a church.

And ST Bende wrote a quest post for my blog tour stop!

Thanks so much for letting me visit today, Lola.  As a debut author, it’s been fantastic to be embraced by such a lovely group of bloggers.  Y’all have been so kind to me!

ELSKER, Book One in THE ELSKER SAGA, follows twenty-year-old Kristia Tostenson as she leaves her small town to find adventure at Cardiff University in Wales.  Kristia gets a lot more than she bargained for when she falls in love with Ull Myhr.  He’s not just a graduate student – he’s an Asgardian Assassin and the Norse God of Winter.  Kristia’s orderly life is about to get seriously complicated.

Kristia’s just one of my fabulous cast of characters.  But rather than tell you about them, I want you to tell me:

Which ELSKER character are you?

The Girl Next Door
If you prefer Earl Grey to Grey Goose and book clubs to night clubs, stay up late studying because you just love learning that much, and would rather hang out in a coffee shop with your best friend than have a wild night on the town, you’re a Kristia.  This small-town girl values family, friendships and hard work.  Her life is pretty predictable… except for the pesky visions that give her unwanted glimpses of the future at inopportune times.  And except for the hunky Norse god who’s about to rock her world.

The Adventurer
If you dream of bright lights, big cities and the rush of fame, change your nail polish and hair color almost daily, and thrive under pressure, you’re an Ardis.  Kristia’s best human friend craves change — it’s why she’s the only member of her high school class that didn’t go on to the neighboring University of the Pacific Northwest.  This NYU acting major thinks life is too short not to live every minute to its fullest.  After all, you only live once… unless you’re immortal.

The Organizer
If you see the world in black and white, can diagram your way out of any dilemma, and have a quirky sense of humor that always keeps your friends laughing, you’re an Emma.  Kristia’s flatmate at Cardiff University might be useless in the kitchen, but she’s great at solving any problem, from the complicated equations she manages as a math major to the overwhelming guy problems her roomie brings home.  She’s got a heart of gold and a cupboard full of McVities Caramel Digestives — cookies, to you exchange students.  And she’s more than willing to share.

The Jill of All Trades
If you devour fashion magazines like Norwegian chocolate (it’s even better than Swiss, trust me), could spend hours in the kitchen whipping up the best baked goods known to mortals, and could kick your man’s behind in a swordfight, you’re an Inga.  Ull’s best goddess friend and Gunnar’s wife has a closet full of couture, loves IndyCar and ballet, and works as a fight choreographer for Odin’s army.  She’s the whole package, but this ethereally graceful and always gorgeous goddess is never intimidating.  Ever.

So, which character are you?  Send me a tweet and let me know! I’m a combination of the four — I have Kristia’s study habits, Ardis’ love of theatre, Emma’s obsession with McVities, and Inga’s IndyCar fandom.  (I’m Team Helio and Team Ryan Hunter-Reay!)

I sure am Kristia / the Girl Next Door. I love earl grey tea and I prefer studying and reading over a night on the town. My life is predictable and luckily I don’t have the problem of visions.

Elsker is available now from Entranced Publishing.
Tur, the prequel, can be downloaded here for free

And don’t forget to stop by http://stbende.blogspot.com/ between April 11th and May 20th to enter to win fabulous prizes in the ELSKER Release Month of Giveaways!