Today is my stop on the blog tour for ELECTED by Rori Shay! 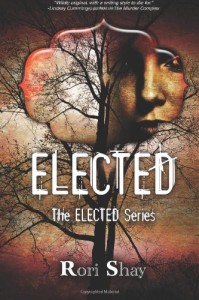 Elected
by Rori Shay
Genre: YA Sci-fi
Publisher:Silence in the Library Publishing

Blurb:
It’s the year 2185, and in two weeks, Aloy will turn eighteen and take her father’s place as president of the country. But to do so, she must masquerade as a boy to avoid violating the Eco-Accords, four treaties designed to bring the world back from the brink of environmental extinction. Aloy hopes to govern like her father, but she is inheriting a different country. The long concealed Technology Faction is stepping out of the shadows, and as turmoil grows within her country, cryptic threats also arrive from beyond the borders.

As she struggles to lead, Aloy maintains her cover by marrying a woman, mean-while battling feelings for the boy who knows her secret – the boy who is somehow connected to her country’s recent upheaval. When assassination attempts add to the turmoil, Aloy doesn’t know whom to trust. She understood leadership required sacrifice. She just didn’t realize the sacrifice might be her life.

You can buy Elected here:
– Amazon

How Rori Shay came up with the names for her character
I came up with the names of the three characters in ELECTED 1/2 haphazardly and 1/2 on complete purpose. I wanted to pick names that weren’t so crazy but that did sound a little futuristic because the book is set in 2185. Aloy’s name will be explained in ELECTED’s book 3, so I don’t want to give too much away, but it has to do with metal. Vienne is supposed to be this gorgeous, caring, nurturing, perfect woman, so I named her after the city my grandmother originated from, Vienna, Austria. And for the main male character’s name, I wanted something that was a firm name. One that sounded a little dangerous but that was something which could be tamed. Griffin just sounded right to me.

About the Author:
Rori Shay is an author living in the Washington, DC area with her husband, daugh-ters, black lab, and cat – just not quite in the same exciting circumstances as ELECTED’s main character, Aloy. She enjoys running, gardening, reading, doing yoga, and volunteering with the Dwelling Place non-profit. Rori is a member of the Society of Children’s Book Writers and Illustrators (SCBWI).