Today is my stop during the blog tour for Darkness Watching by Emma L Adams, I share my review with you and there is a tour wide giveaway. 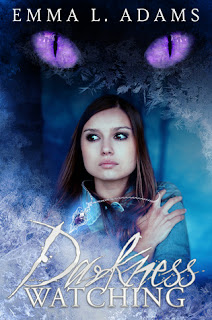 Blurb: Eighteen-year-old Ashlyn is one interview away from her future when she first sees the demons. She thinks she’s losing her mind, but the truth is far more frightening: she can see into the Darkworld, the home of spirits– and the darkness is staring back.

All-night parties, new friendships and a life without rules or limits are all part of the package of student life – but demons still stalk Ash, and their interest in her has attracted the attention of every sorcerer in the area. Ash is soon caught between her new life and a group of other students with a connection to the Darkworld, who could offer the answers she’s looking for. The demons want something from her, and someone is determined to kill her before she can find out what it is.

In a world where darkness lurks beneath the surface, not everyone is what they appear to be…

After participating in the cover reveal for this book I knew I wanted to read this. So when I got the invite for the blog tour I immediately signed up.

Darkness Watching has a different feel than what the blurb says. The story is about Ashlyn, a girl who can shadowy creatures and thinks she is going mad. Then she goes off to university and finds out more about it all. Darkness Watching takes the cliché plot of a girl who finds out she is different and adds original touches to it. The idea of the Darkworld is really original and while some parts of the book are really predictable it is really enjoyable and there are some surprising turns as well. Sometimes I realized things before Ashlyn did, but overal I still really enjoyed this book. There are some parts that feel a bit off or that need some more explanation, but I wanted to keep reading to find out more.

I liked Ashlyn, but I think this book is more story focussed than character focussed. Sure the characters do play an important role, but I didn’t feel like I got to really know the characters. Ashlyn is the main character and we learn a lot about her, but still i would’ve liked more. There are a lot of side characters and at the beginning I had some toruble keeping them all apart, this got easier the further I got into the book. Also the side characters don’t really come alive. The have their own characteristics, but I felt like I didn’t really got to know them. And some of Ashlyn her flatmates just weren’t fleshed out enough. Her two friends seemed inditical and apart from knowing one of them got durk from red wine and Ashlyn spend a lot of time with them I didn’t really got to know them.

I really like the idea of the darkworld and it’s just a touch different from other ghost and demon stories out there. But just like I mentioned with the characters, this book is really storyfocussed. There are no info dumps, but at times I wished there would be more information about the Darkworld, because had so many questions. Also everything surrounding the Venantium kept vague too. There is some information about them, but it was too little. Despite me wanting more world building, the world building was done really well and I wanted to keep reading to find out more.

To conclude: I really enjoyed Darkness Watching, it takes an cliche idea and add original touches to it. Creating an original world and enjoyable, but sometimes a bit predictable story. This book is story focussed and I would’ve liked learning more about both the characters and the world. Overal I really enjoyed this book and am looking forward to read where the author takes this series next. 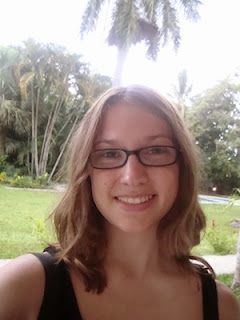 About the author:
Emma spent her childhood creating imaginary worlds to compensate for a disappointingly average reality, so it was probably inevitable that she ended up writing fantasy and paranormal for young adults. She was born in Birmingham, UK, which she fled at the first opportunity to study English Literature at Lancaster University. In her three years at Lancaster, she hiked up mountains, skydived in Australia, and endured a traumatic episode involving a swarm of bees in the Costa Rican jungle. She also wrote various novels and short stories. These included her first publication, a rather bleak dystopian piece, and a disturbing story about a homicidal duck (which she hopes will never see the light of day).

Now a reluctant graduate, she can usually be found in front of her writing desk, creating weird and wonderful alternative worlds. Her debut novel The Puppet Spell, published in 2013 by Rowanvale Books, is a fantasy tale for young adults and the young at heart, inspired by her lifelong love of the fantastical, mythology, and video games. Emma also writes supernatural fantasy novels for older teens and adults. Her next book, Darkness Watching, is the first in the upper-YA/New Adult Darkworld series, and will be published in September 2013 by Curiosity Quills Press.

There is a tour wide giveaway to win a paperback copy of this book:
a Rafflecopter giveaway