Today is my stop during the blog tour for Beasts of Burdin by Alex Nader. In this post you’ll find out a bit more about this book and there is an awesome tens list from Alex about his ten favourite foods. 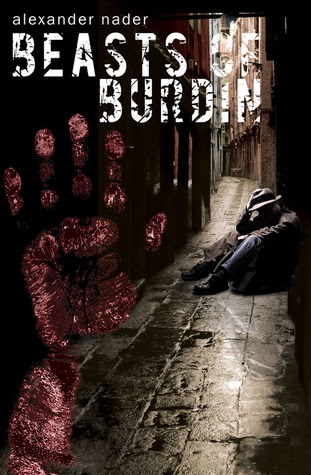 Beasts of Burding
by Alex Nader

In fact, to get far far away, he dragged Nora, his rockabilly secretary, from Miami to the Tennessee mountains where he’s lived a life of peace—if peace can be defined as drowning in scotch and taking private eye jobs to keep the lights on. Jobs for real people. Not demons.

He’s retired from that. Remember?

Demon hunters aren’t a dime a dozen, though, and when Ty’s brother asks him for a favor—just one—what’s a brother to do? Agreeing to take down one hillbilly demon shouldn’t take that long. In. Decapitate. Out. Favor complete. Back to the office where Nora and his bottle of whiskey are waiting.

Unfortunately for Ty, staying retired doesn’t seem to be in the cards, and an avalanche of bad luck draws him right back to an agency he despises and the career that nearly cost him his sanity.

This time, Ty has no way out and will have to face his own demons just to survive.

Hello indigenous peoples of the internet and loyal readers of Lola’s blog. I’m glad to be here and I hope you find my offerings acceptable. I don’t come with words of writing or list of movies or anything quite like that. I’m here today to talk to you all in my serious voice, about a very serious subject. Yup, game-face on ladies and gents, we’re going in. Put on your snorkels, cause it’s about to get deep.
Ah-hem…
In a vague grouping by genre, sort of, I bring to you: My ten favorite things to stuff in my face.
Desserts first, because I’m a dessert first kind of guy. Ladies can talk about chocolate cravings all they want, but I can put away an entire cake in less than twenty-four hours. That’s right, I spit in the face of diabetes like an unworthy jousting opponent in the lists.
1.    Cheesecake – I used to love the Jello no-bake cheesecakes, but over the years my cheesecakery has refined. I now prefer the good stuff. Topped with fruit is good, infused with dark chocolate of some sort is better. A local cheesecake shop has got moonshine cherry cheesecake that I have yet to try, but it’s on my bucket list right next to skiing down a mountain of $100 bills.
2.    Black forest Cake – Chocolate, cherry, and whip cream for icing. It’s a trifecta of awesome. Plus, my wife likes to throw some chocolate chips in the whip cream to make it even better. Yeah, she’s an awesome woman.
3.    Red Velvet Cake – Food Network has a Paula Dean RVC recipe that is purely wonderful. I would link it here, but I’m lazy and yes, I am on an acronym basis with my desserts. Get over it.
4.    Tiramisu – This is another one my wife does wonderful things with. She follows some unknown recipe in her head that results in liquor soaked cake madness. It’s good in a restaurant, but at home it’s a godsend. Seriously, next time she makes some I’ll share some with you. Actually, who am I kidding? I don’t share dessert.
5.    Tamales – We’ve moved on to main courses. Things are heating up. Literally, the food is getting hotter. Desserts are cold or room temperature. Tamales? They are best served as hellfire incarnate. And if you’ve never had an authentic tamale made from someone from Mexico, I feel sorry for you my friend. It would be like having never met the person who owns the feet that stomped your grapes in to wine.
6.    Tacos – Sticking with the south of the border here. What could be better than tacos? Really? Have you got anything? Didn’t think so. No, you in the back, put your hand down. Yeah, no, your opinion doesn’t count. Tacos rule. End of story.
7.    Stir Fry – So maybe tacos weren’t the end of the story because I’m still talking. Okay, I’ve shifted east; far east. Meat and vegetables and unhealthy amounts of oil unceremoniously dumped on top of some nice rice. Unless you go to one of those hibachi places where they cook on your table, then I guess you food is ceremoniously dumped on the rice. Big difference, I suppose.
8.    Cheeseburger – Good ol’ ‘Merican burger. That’s what life is all about. They are best served from gas station grills because I’m pretty sure they use motor oil to grease the grill and that’s okay by me.
9.    Chili – Another staple of life. I don’t even care if it has meat in it. Beans and some form of spiced tomato mixture and I am freaking golden, but if you’ve got some ground beef, drop it in there, would ya?
10.    Chimichurri Steak – Last one. Chimichurri steak is one of my all time favs. Here I’ll even give you a half-recipe of my favorite way to enjoy it. Find and follow a recipe for the marinade, any will do. Then, while the steak is grilling, stir-fry some bell peppers and onion. I prefer red bell, but you can use whatever makes you happy. It’s your food, I’m just a writer. Once the pepper/onion mix is almost ready you drop some provolone cheese on top to melt. Now, put down a bed of romaine, then steak, then peppers/onion/cheese. It’s like a chimichurri philly cheesesteak salad. You can also drizzle with olive oil, but that’s unnecessary as you should have plenty of oil from the veggies. Also, I leave the parsley out of my marinade because I hate it, but the choice on that is yours, choose wisely.
There, you can’t say I never gave you nothing, so you should probably go buy my book now. It is completely void of delicious recipes like the one above. BAM! I’m out.
(Note: in # 10 I used the word “Chimichurri” three times and spelled it different every time. I even got it correct once.) 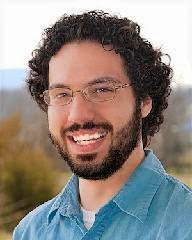 About the Author:
Alex lives in the tourist infested hills of east Tennessee with his amazing wife/muse and three superb children. He would tell you more about how awesome they are, but you probably wouldn’t believe him. When he’s not hanging out with them he’s making pizzas. When he’s not doing that he’s working at a bookstore and occasionally he jots a few words down. He’s a big fan of good music, good storytelling, and mixed martial arts.

He once wrote a short story about pirates to his wife via text message that blossomed into a full length novel and never stopped after that.

3 responses to “Blog tour: Beasts of Burdin by Alex Nader”