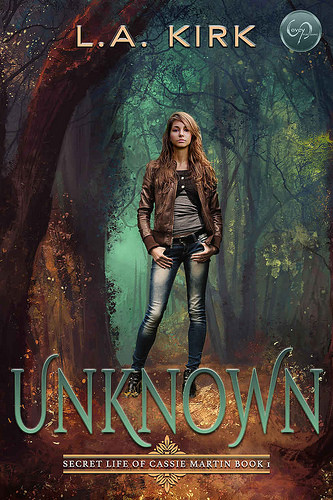 Unknown (The Secret Life of Cassie Martin #1)
by L.A. Kirk

Blurb:
Cassie Martin is used to being shuffled around in the foster system, so when her newest guardians want to send her away to a camp for “exceptional youths” she sees it as their way to deal with a troubled teen. She never could have guessed they were telling the truth!

Soon Cassie finds herself surrounded by other kids her own age who display unusual aptitudes for learning. Faced with a camp bully, and hot guys who seem determined to get to know her better, Cassie’s life has just gotten a lot more interesting, but maybe not for the better.

Unusual things are happening at the camp, and the counselors are determined to keep everyone in the dark. But in a camp designed to encourage brilliant minds, it’s only a matter of time before the truth will be revealed.

My Review:
I really liked the concept for this book and I was pretty sure I would really enjoy this one. But in the end it just fell a bit flat for me. There were parts I really enjoyed, but overall I felt like the book didn’t fully came alive for me.

I liked the camp setting, for some reason I just like reading about camps and the setting was one of the things that caught my attention about this book. Unfortunately the writing style didn’t fully work for me and I didn’t get that camp feel as much as I had hoped. I also went in with slightly wrong expectations as I thought the mystery focus would be stronger. But it’s really minor so far. The book isn’t that long, so it’s possible we see more of the mystery in the next book, but so far it failed to really make me curious. It just wasn’t really intriguing to me yet.

While it’s a relatively short read the pace can feel pretty slow at times and then at other times it almost feels rushed with how there is a skip over some scenes that I thought seemed important like their first day of tasks. Or some scenes in which they get to know each other slowly. Or maybe the book just felt a bit slow as it didn’t fully grab my attention. Overall I did enjoy it while reading, even tough I didn’t like it as much as I would’ve liked.

Cassie has grown up in different foster houses, never finding a place to belong. Her latest foster parents send her off to a camp for smart kids. She’s not too happy about being sent to a camp, but she quickly finds out she enjoys it more than she thought. They somehow have her listed as a boy at fist and while she changed her cabin, she ends up with a team of four boys. I am still not sure how the mix up about her gender happened, but it’s essential for the plot, so I just went with it.

Cassie seemed like a nice enough main character, she has this sad backstory that explains a bit about her personality and she can stand up for herself. But somehow I never full warmed up to her. I liked how she acted in some scenes and then in other scenes I didn’t like her behavior. I also didn’t care for the whole protection thing, with the boys wanting to protect her and she insisting she can take care of her own. I also felt like we got to know the boys better than her, while she is the main character. I feel like we only learn a few tidbits about her past and her abilities and I just would’ve liked more.

While I never fully warmed up to Cassie I did like the four boys. The author did her best to give them all a different feel and while at first it was a bit difficult to keep them separate once we got to know them better it got a lot easier. I am just a bit sad much of the main getting to know each other part felt a bit forced with a scene were they are all telling something about their past. I felt like it could’ve had more impact if we got their stories spread out throughout the book instead of all at once. We also get a feel for each of their individual skills and some of their personality is centered around that skill.

They really grow close as a group, but there’s not much romance yet. It’s more close friends who trust and feel very comfortable with each other, but I think it will steer more in the romance direction in the next book. The epilogue hinted that some of the boys are developing feelings for her. It was interesting to see how the reverse harem aspect was handled with this being a YA book and the set-up with them working as a team.

To summarize: I was really looking forward to this book, but sadly it didn’t fully came alive for me. I liked the camp setting and how each of the boys has their own personality. The writing style didn’t fully work for me and felt a bit off at times and I felt like we didn’t get to know the main character as much as I would’ve liked. This is mostly the start of the romance as it doesn’t really move yet into the direction of romance yet. I did like how the character are very close and have to work together as a team. The mystery is pretty minimal and failed to really intrigue me. So there were parts I really enjoyed and also some parts I liked less. Not yet sure if I will continue the series.

Do you like reading about books set at camp? What’s the last book you read that was set at a camp?