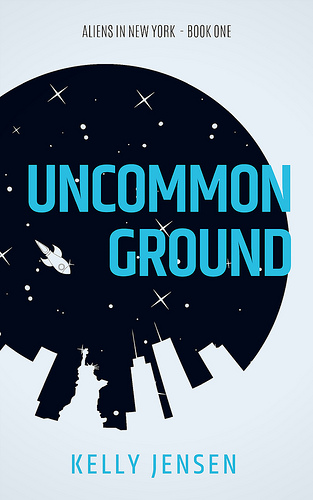 Blurb:
Dillon Lee’s grandfather was a conspiracy theorist. Every summer he’d take Dillon on a tour of New York City while entertaining him with tales of aliens. Fifteen years later, after a phone call from a lawyer, Dillon is carrying his grandfather’s ashes from landmark to landmark, paying a sort of tribute, and trying to figure out what to do with his unexpected legacy. When someone tries to steal the ashes, a guy Dillon has barely met leaps to the rescue, saving the urn and the day.

Steilang Skovgaard is a reclusive billionaire—and not human. He’s been living in Manhattan for over twenty years, working on a long-term plan to establish a safe haven for his people. For seven years, his reports have gone unanswered, however, and he is the only surviving member of his interstellar team. The connection he forms with Dillon soon after meeting him is something he’s missed, something he craves.

But after someone keeps trying to steal the ashes, it looks as though Dillon’s grandfather was involved in more than theories—and might not have been exactly who everyone thought he was. Steilang doesn’t know how close he can get to the truth without revealing himself, and Dillon is running out of people to trust. Can these two work out what’s going on before the thieves set their sights higher?

Last year I discovered this author’s books and Uncommon Ground has been on my wishlist since then as I liked the sound of it and I am so happy I got the chance to read it now. It’s a lighthearted science fiction romance set on earth, it has a romance, a bit of mystery/ suspense and it’s a lot of fun. I really enjoyed reading this book.

Uncommon Ground is told from dual point of views from Dillon and Lang’s perspective. Dillon traveled to New York as a tribute to his grandfather who recently died and wants to visit some places in new York while carrying his grandfather’s ashes. Then he makes a stop for coffee and he locks eyes with Lang, they have an instant attraction. When someone tries to steal Dillon’s backpack with his grandfather’s ashes in them Lang helps him get it back. And so starts their story.

This book was so much fun to read. Lang is an alien staying in New York, he has a mission and I liked how we get a good feel for what he’s doing here and enough alien technology and such to give it that science fiction vibe. I liked the setting on Earth. The whole plot line with aliens being on Earth here was interesting too. And it was great to slowly figure out why someone is trying to steal the ashes of Dillon’s grandfather.

Dillon and Lang feel a mutual attraction the moment they meet and their romance starts off strong and progresses in steam quite quickly. But it is clear they care for each other and their relationship grows in depth throughout the book. These two were great together and I enjoyed reading about them. It was also great to see how Lang accepted Dillon, who always felt like he wasn’t normal. And Lang who has been so lonely finally find someone he wants to spend time with. They have some things to work through, but I like how it was low on the drama. This book wraps things up nicely, while still leaving things open enough for a sequel, which is releasing soon!

While the focus is mostly on the romance and the storyline surrounding Dillon’s grandfather, there is still enough alien stuff and science fiction parts too. It is light on the sci-fi elements, but I found that worked well here and it’s still a very prominent part of the story I liked how we get a feel for Lang’s planet, why he’s here the clan and different tribes. I liked the plot line surrounding the aliens and seeing how it got resolved. I also liked Lang’s AI.

To summarize: this light sci-fi romance book was a lot of fun to read. Both main characters are great to read about and I liked them together. There is romance, aliens and a bit of a mystery too. Dillon and Lang were so good together, their relationship steams up quickly, but it’s also clear they care for each other and their relationship deepens throughout the story. I liked the world building and learning a bit about the aliens. It’s light on the sci-fi details, but there’s still enough to make the sci-fi parts come alive and I liked the plot line surrounding the aliens who were here on Earth. All in all this was a great read and I am glad there will be a sequel.

Do you like science fiction books set on Earth?

Tours:
There are no tours currently open for sign-up